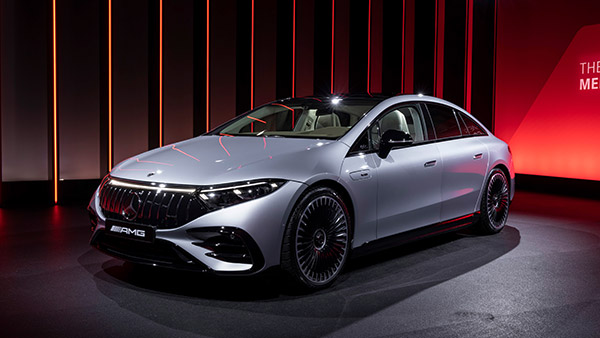 This is the company’s second electric car after Mercedes-Benz EQC in India. Initially, the car has been brought to India via the CBU route, but later the locally assembled EQS 580 will be launched.

The MG EQS is the company’s second long range electric car with a range of 529-586 km. The company has used a lithium-ion battery of 108.7 kWh in it. Two electric motors have been used in the MG EQS 4MATIC+.

On both the axles, the company has fitted an electric motor each, which together delivers a maximum power of 509 bhp and a maximum torque of 828 Nm. This car can accelerate from 0-100 kmph in just 4.1 seconds.

The Mercedes-Benz EQS has been given an aerodynamic design that reduces air pressure and gives it more range. Mercedes has used the new MBUX hyperscreen in this SUV. This hyperscreen would combine three separate screens to form one giant screen.

This screen spans the full width of the dashboard. The MBUX serves as both the screen, instrument cluster and entertainment system. The company has introduced this car in a total of 6 color options. The car also supports 200kW fast charging.

Talking about charging, this SUV gets charged up to 10-80 percent in just 35 minutes with the help of a fast charger. The company has used 21-inch cross-spoke alloy wheels in the AMG EQS 53 4MATIC+, apart from this it gets a huge boot space of 610 liters.

Along with this, the company has provided a standard 11 kW charger and another 22 kW fast charger, which are being given optionally. It takes a full 11 hours to charge with a simple 240 volt wall socket. Let us tell you that Mercedes-Benz had already announced the launch of 6 different electric models of the EQ range by the end of 2022.

The company will bring the flagship sedans EQA, EQB, EQE and EQS under the EQ brand. Not only this, the company is also going to bring 25 new plug-in hybrid models by 2025. The company will launch these cars in the international market according to the availability of infrastructure.