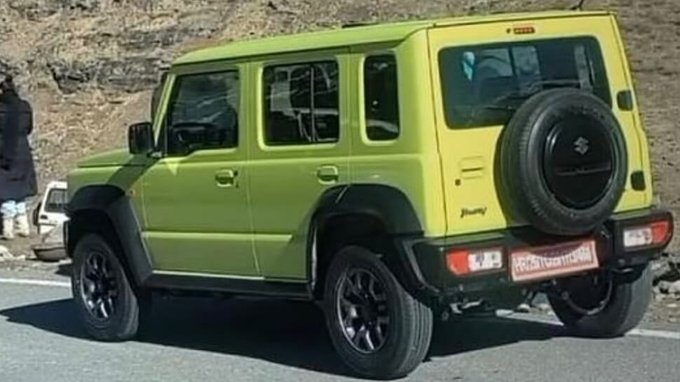 Maruti Jimny 5-Door: The new Maruti Suzuki Jimny 5-door version will be introduced at the 2023 Auto Expo to be held in January next year. Even before now the picture of the SUV has leaked on the internet. The production-spec model looks much larger than its 3-door Jimny Sierra.

Maruti Jimny 5-Door Leaked Image: The new Maruti Suzuki Jimny 5-door version will be introduced at the 2023 Auto Expo to be held in January next year. Even before now the picture of the SUV has leaked on the internet. The production-spec model looks much larger than its 3-door Jimny Sierra. However, design lenguez does not change. Its original look has been retained. The new Maruti Jimny 5-door has been spotted during testing. Even before this, the SUV was seen but then it had pictures that covered its design.

The leaked picture suggests that the new model will get a longer wheelbase, which will help create more space inside the cabin. The picture shows that its body is much larger than the (3-door version ) and has a spare wheel on the tailgate. The model seen was in the signature kinetic yellow paint scheme. It saw large black plastic cladding. Also seen chunky wheels and flared fenders in the car. Its 3 door version boxy body style is retained. There is large quarter glass for the back door, there is also a small rear glass area behind it.

According to media reports, Jimny will be 5-door length- 3,850mm, width- 1645mm and height- 1730mm. Its wheelbase – 2550mm long. Compared to the Sierra, the Jimny 5-door wheelbase will be 300 mm longer and the total length will also increase by 300 mm. The longer wheelbase and size increase will help Suzuki engineers create more space inside the cabin. The ground clearance of the SUV will be 210mm. According to reports, the new Jimny 5-door can be called the new Maruti Gypsy in India. Please tell that Gypsy was discontinued in 2018.

It is expected to have a 1.5-liter K15B petrol engine, which also comes in the Ciaz sedan. This engine will generate 102bhp and 130Nm torque. The engine can be given Suzuki’s mild hybrid technology. Transmission options can have a 5-speed manual and 4-speed automatic. AllGrip Pro 4WD system can also be provided in this. It will be faced by Mahindra Thar in the market.