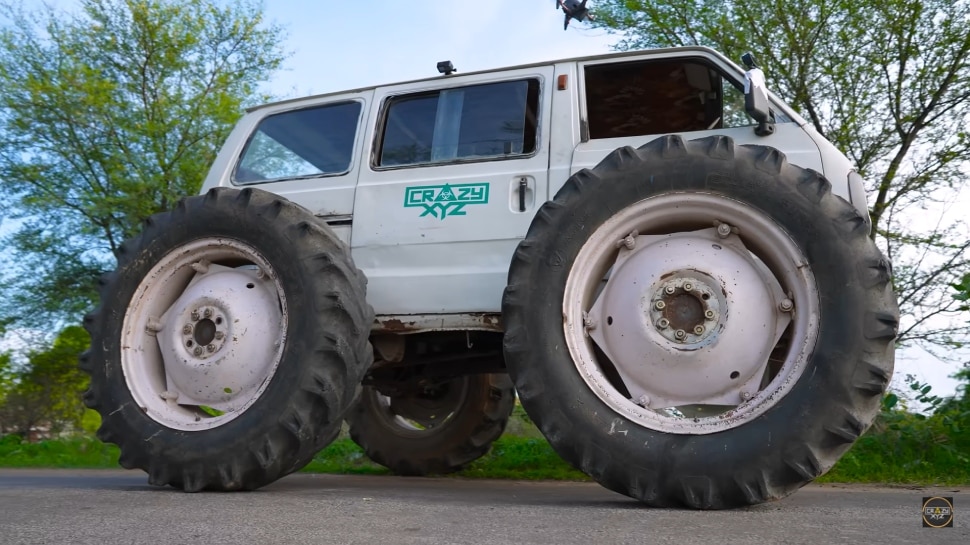 Maruti Omni Modification: A YouTuber recently installed bigger tractor tires on a Maruti Omni vehicle and then drove the vehicle on the road. But you will also be surprised to see what happened after this and try not to make such a mistake.

Maruti Omni Modification Video: Car modification is a hobby for many, while others try to get the required features installed. But hardly you have seen anyone putting tractor tires in the car. A YouTuber recently installed a large tractor tire on a Maruti Omni vehicle and then drove the vehicle on the road. But you will also be surprised to see what happened after this and try not to make such a mistake.

Actually, the video of this experiment has been uploaded by the popular YouTube channel Crazy XYZ. In the video, the YouTuber put 4 tires of the tractor in an old Maruti Omni van and then saw the vehicle running on the road. Earlier, the same experiment was tried in Hyundai Xcent, which failed.

The YouTuber first removed all the four wheels of the van and then installed a metal extender in the axle. Now the rear tires of the two tractors were fitted to the vehicle. Once the four wheels were fitted, the vehicle was brought on the road. This Maruti van looked quite dangerous in appearance. The front doors of the car were not even opening because of the huge tyres. In such a situation, the YouTuber had to enter the vehicle from the back door itself.

Initially the car was driven slowly. Due to the large tyres, the vehicle became very heavy and the engine was reading a lot of stress. Its width was such that no other vehicle coming from behind on the road was able to overtake it.