Mahindra’s Born EVs will get plane cockpit-like cabin, to be revealed in July 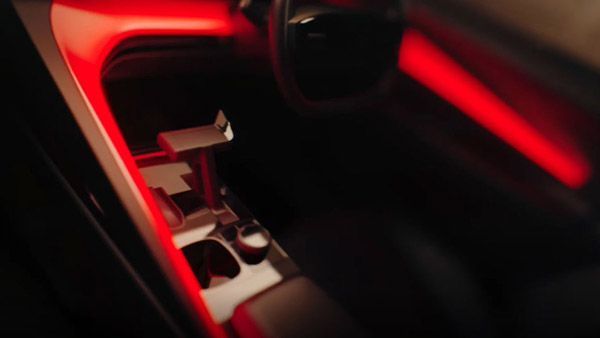 The latest teaser video that can be seen gives some close but brief glimpses at the interior and exterior design of these upcoming EVs and it is surely going to excite people in the times to come. The cabin of the EV shown in the teaser has been given a cockpit-style design.

The cockpit-style cabin gets LED lights all around, starting from the center console and leading to the driver’s side door. Apart from this, a rotary knob and a chunky lever can also be seen in the center console, which probably controls the drive selector.

The concept vehicle gets sporty bucket seats with wraparound headrests. Talking about the exterior design seen in the teaser video, it uses rear-view cameras instead of sporty and futuristic designed alloy wheels and ORVMs.

Apart from this, a fin-like pattern can also be seen on the cladding running the length of the car at the bottom of the car. If you look carefully, you will also see a panoramic sunroof in this concept car. A dual-screen setup was also seen on the Mahindra Born EVs in the previous teaser.

We also get to see a similar setup in the Mahindra XUV700. Apart from this, these concept cars also get bold LED DRLs and LED taillights running on the face and tail respectively. These concept electric SUVs have been designed by UK-based Mahindra Advanced Design Europe (MADE).

It is being told that of these upcoming Mahindra Born EVs, two will get to see the “traditional” profile, while one will be a coupe-styled SUV. It is believed that one of these could also be Mahindra XUV900. According to the information, these EVs will be built on M&M’s New Born Electric platform.

Not all of these EVs will share their architecture with the existing ICE engine vehicles. During its annual analyst meeting last year, Mahindra & Mahindra revealed its plans to launch Born EVs between 2025 and 2026.

However, with the promotion of electric mobility in the Indian automobile industry, the production version of these concept EVs will come before that. The electric cars Mahindra & Mahindra is currently working on are not the only electric cars.