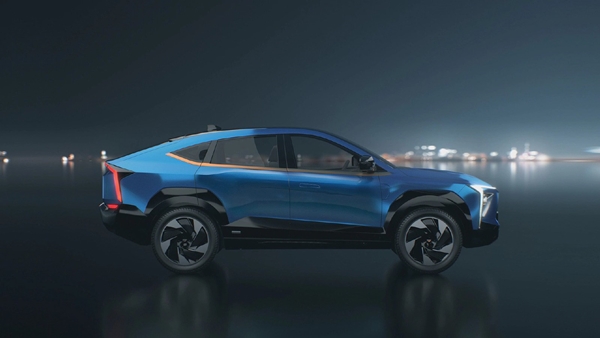 The company had revealed five electric SUVs on August 15, in which the full details of the XUV.e9 have been revealed. Some reports have also revealed the range, features and dimensions of the XUV.e9. Here we will tell you how Mahindra XUV.e9 is going to be.

The new Mahindra XUV.e9 will be launched in April 2025. The new model is based on the new Heartcore design philosophy. In terms of dimensions, it measures 4,790mm in length, 1,905mm in width and 1,690mm in height and has a wheelbase of 2,775mm. This electric SUV has been given a coupe-like roofline design. The five-seater electric SUV offers a panoramic sky roof and premium upholstery.

This electric SUV will be equipped with many modern features. Its feature list will include a large widescreen display, futuristic dashboard layout and a heads-up display. Apart from this, the vehicle will also get the latest safety features like over-the-air updates (OTA update), multiple airbags, traction control, ABS-EBD, Level 2+ ADAS autonomous driving.

As of now, Mahindra has not shared the official data related to the range and battery of the XUV.e9. But many information about it has been disclosed in the reports. Built on the new Inglo platform, the Mahindra XUV.e9 could be offered with a 60-80 kWh lithium-ion battery pack. The company is using blades and prismatic batteries in the new electric SUV range.

According to reports, the electric motor of the Mahindra XUV.e9 will be capable of producing 170-290 kWh of power. However, actual figures are expected to be slightly different. This e-SUV will be able to accelerate from zero to 100 km/h in just six seconds. The upcoming electric range will offer fast charging up to 175kWh. Apart from this, the INGLO platform will also get AWD option and multiple drive modes. Mahindra is planning to launch this electric SUV in 2025.

Domestic automaker Mahindra has partnered with Volkswagen, a leading global manufacturer of electric cars for platform, battery manufacturing and technical support. Mahindra has said that this agreement will be finalized by December 2022. Mahindra and Volkswagen have announced the launch of many of their electric models in this partnership in India as well as overseas markets.

The objective of this partnership between Mahindra and Volkswagen is to ensure the supply of electric car components as well as to produce one million electric cars. Additionally, M&M and Volkswagen also plan to explore further opportunities for a comprehensive strategic alliance collaboration to accelerate the electrification of the Indian automotive market.