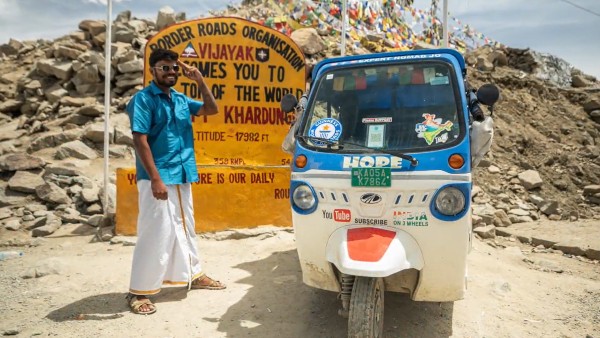 A person named Jothi reached here with an electric auto. This electric is Mahindra’s popular Trio and that is why Anand Mahindra tweeted on Friday thanking Jothi, writing, “Thank you Jothi for taking the Trio to the top of the world.” Khardunga La Pass is situated at an altitude of 17,900 feet in Leh and is among the highest roads in the world.

Coming to the specifications of the Mahindra Trio, it comes with a modern Lithium-Ion battery with a capacity of 48V (installed) – 8 kWh. This e-rickshaw gets fully charged from 0-100% in 3-4 hours under standard conditions. Mahindra Treo is a 3-seater e-rickshaw with a top speed of 45 km/h and a certified range of 170 km and a driving range of 130 km.

How was the sale?

Mahindra Electric is going to introduce 5 new electric SUVs on the upcoming 15th August. The company is going to bring a new range of electric SUVs in the Indian market, under which the electric version of the XUV300 will be brought under the name XUV400. Mahindra has confirmed that the concept vehicles will be ready for production by 2025.

It is a big deal for any vehicle to reach a height of 18,000 feet and Mahindra’s Electric Auto has achieved this feat. This feat of Mahindra’s Trio also shows its capability and range.