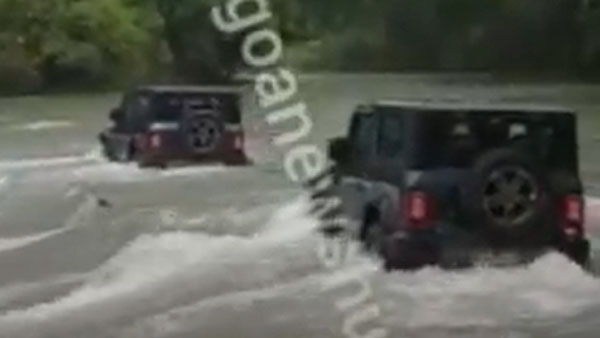 It is said that these videos are from Kollam in Goa where the water of a river named Dudhsagar started flowing over the pool due to rain. In such a situation, two Mahindra Thar SUVs easily cross the raging river. It can be seen in the video clip that the river is in spate due to which water is flowing rapidly over the bridge.

In such a situation, two Mahindra Thar SUVs land on the bridge and move slowly and cross the river. Sharing the video on his Twitter account, Anand Mahindra said, “I found this video on my inbox in the morning. I appreciate the confidence people have on Mahindra Thar but driving like this can prove to be dangerous. I am Thar drivers. I would like to tell them to refrain from doing this.”

Let us tell you that Mahindra Thar is a capable off-roader SUV. This is the reason why it is the favorite car of off-roaders in many countries across the world. The new generation Mahindra Thar was launched in India in October, 2020.

The new Mahindra Thar comes with more power, better design and more features than the old one. The new Thar is now even safer than before as it has been given a 4-star safety rating by the Global NCAP.

The company has recently revealed that the 5-door model of Thar will also be brought soon. The company said that people are inquiring about this new model. In such a situation, the company has also stepped up efforts to take it down. According to the information, the 5-door Thar can be launched in India between 2023-2026.