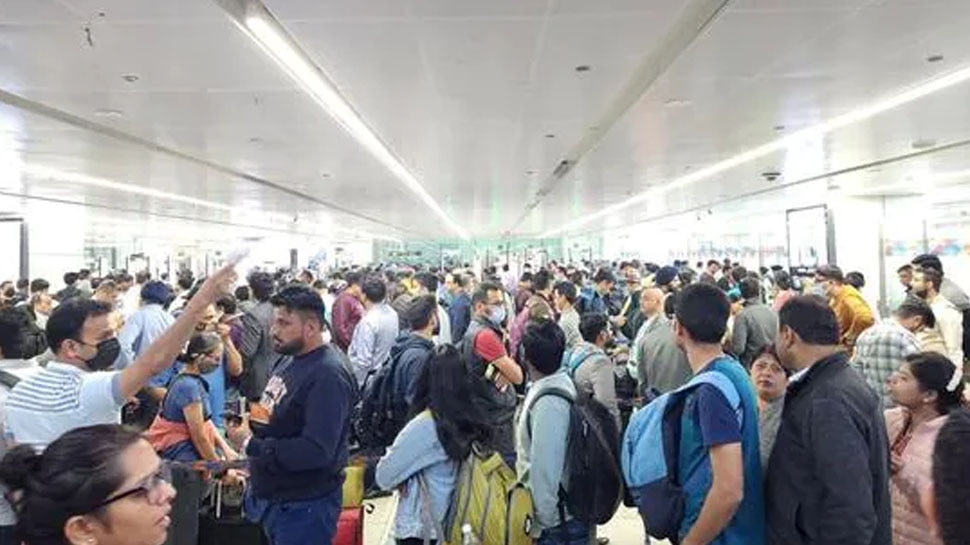 For the last 10 days at Terminal 3 of Delhi Airport, there is a chaos that many passengers are missing daily flights. Many troubled travelers have lodged their protest on social media, After which the government had to step in with the promise of improving the functioning by putting more manpower on Terminal 3 of IGI Airport. Is it a matter of very small steps taken too late, When an unhappy traveler said that the condition of GMR airport handed over in private hands is getting worse than ISBT of Delhi.

Despite many efforts by the government, increasing complaints of passengers raise the question mark whether the government and the private sector add new capabilities to existing airports and build new airports Moving in the right direction for. Amid this chaos at Delhi Airport daily, many passengers have noticed that a new digitalisation scheme has been launched by the government to improve the situation, Which is based on facial monitoring. Through this scheme, passengers can easily get security check on arrival at the airport. It requires base detail and face detection to enroll.

From problems in security clearance to pick-up at Delhi Airport, travelers have a lot of bad experiences to share in local circles (LocalCircles Survey) and on social media. Most of the complaints of passengers have been about security check delays, passenger pickup, inter terminal transfer and baggage claims. Some passengers also said that the responsibility of security check in the hands of the private agency, being snatched from the hands of the CISF, has worsened the situation at the airport and now in clearance Has started giving.

These situations are seen in the survey of local circles

Questions related to the experience of Delhi Airport were asked this year in the survey (LocalCircles Survey on Delhi Airport ). Passengers were asked which area do you think is the worst management at Delhi Airport. 10,870 passengers gave their answers on this question. 38% of them reported that taxi, pickup and parking management are the worst. While 38% also reported the problem of inter terminal connectivity as poor management. At number three, 31% described the delay in security clearance as a poorly managed area.

27% of respondents included in the survey (LocalCircles Survey on Delhi Airport) identified slow baggage claims as an area where they faced more problems. People also expressed displeasure over the baggage operation on both terminals 1 and 2. At the same time 16% of people checked in at the airport and 16% described the condition of toilets as bad. Similarly 9% of people reported immigration process and 7% reported food-shopping as a bad experience. 13% of people surveyed said they had more problems outside the airport than other problem areas outside the options in the survey.

Government will have to take strict steps

If summarized, the level of dissatisfaction among people over the facilities of Delhi Airport ( LocalCircles Survey on Delhi Airport ) has now doubled. A year ago the security issues at the airport had a rating of 15%, which has now increased to 31. This shows that people are now facing more trouble at the airport. Ground reports indicate that many passengers arrive at Airport Terminal 3 three hours earlier, yet they miss their flight. This is not an acceptable situation. The government of Lihaja will have to take serious steps to improve it.