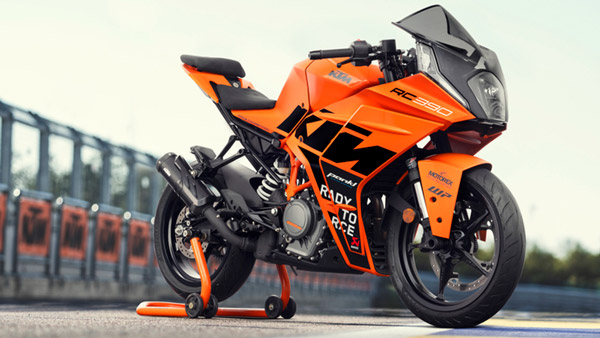 These editions are inspired by the KTM RC16 MotoGP racing bike. The new edition gets orange base paint along with distinctive decals that are visible on the fairing and front fenders. The company has not made any changes in its mechanical configuration. Bookings for the special editions of RC390 and RC200 have started across the country. Its deliveries are likely to start shortly after.

In terms of design, the RC390 gets an all-LED set-up with LED headlight, turn indicators and DRLs at the front. It also gets a windshield which provides protection from the wind and improves the aerodynamics of the motorcycle. Sporty body panels have been used to enhance the visual appeal of the bike.

This bike is also updated in terms of features. It gets a Bluetooth enabled TFT instrument display which is equipped with features like music control, call / SMS alerts and turn navigation. Riders can control music playback and phone calls on the go using its switchgear.

The KTM RC 200 gets a fully adjustable handlebar. Also, LCD display, LED headlight have been given. This bike has ABS with Supermoto mode. It has a fuel tank of 13.7 liters. Its bigger airbox helps it deliver better responsiveness, more torque to its range.

Its radiator helps in cooling the engine, it also gets a windscreen. The rear has an aluminum cast and split pillion grab. It gets 43mm USD forks at the front for suspension and a monoshock unit and braced alloy swingarm at the rear.

For braking, it gets 320 mm disc brakes at the front and 230 mm at the rear with BYBRE calipers. The new RC series has been fitted with newly designed alloy wheels with open hubs and low spokes.