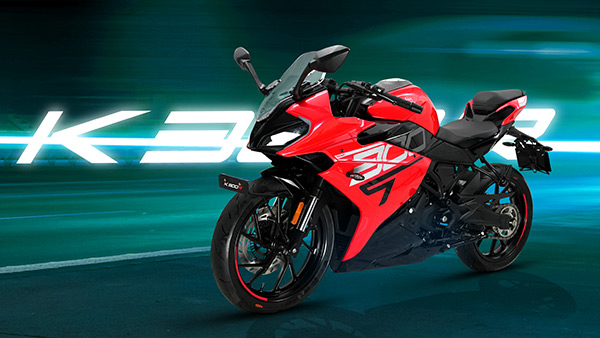 Kiway has offered both the motorcycles in three paint schemes. The K300 N is available in Matte White, Matte Red and Matte Black colours, while the K300 R has been made available in Glossy White, Glossy Red and Glossy Black colours. Coming to the engine, both these motorcycles are powered by a 292.4cc, single-cylinder, liquid-cooled, four-stroke engine. This engine generates a maximum power of 27.1 bhp along with a peak torque of 25 Nm.

The engine is mated to a 6-speed manual gearbox. In terms of hardware, the Keyway K300N gets golden USD front forks along with a mono-shock absorber at the rear. Apart from this, sharp LED headlight, digital instrument cluster, sharp fuel tank and slim back design have been given in the bike.

Keyway’s sporty full faired bike K300R gets LED headlight with LED tail light and LED turn indicators. Twin integrated LED DRLs are also provided in the headlight of the bike. Clip-on-handle bar is available in this bike. Golden USD front forks have been given to make the bike attractive from the front.

Fuel tank of the same capacity has been given in both the bikes. Apart from this, both also get disc brakes, ABS, alloy wheels and tire size of the same size. Kiway has launched its four two wheeler vehicles in the Indian market which includes bikes as well as scooters. With the launch of new bikes, the company has now become available in the market with a total of six models. In India, the company is launching all its vehicles in association with Benelli India.

Kiway has launched two of its cruiser motorcycles in India this year. These include the Keyway K-Lite 250V and the V302C. Both the bikes have been made available in India at a price of Rs 3.09 lakh and Rs 3.89 lakh (ex-showroom) respectively.

Apart from the bikes, the company has also launched Keyway Vieste 300 and Sixties 300i scooters. Both these scooters are equipped with a 300cc engine. These scooters are powered by a single cylinder, liquid cooled, 4-valve engine that produces 18.7 Bhp of power and 22 Nm of torque.