Kia Carens production begins today, to be launched in February 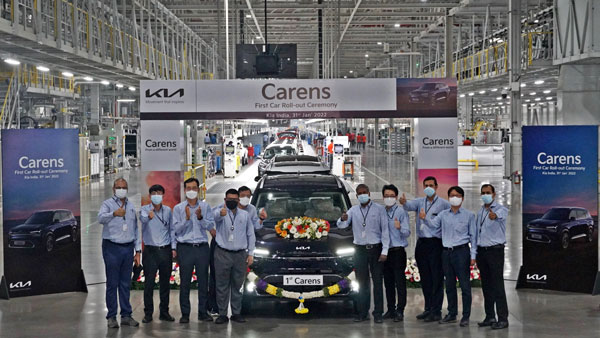 Booking of Kia Carens can be done by visiting the company’s dealership or website by paying Rs 25,000. It received 7,738 bookings on the very first day and is getting good response since then. Let us inform that this is the company’s fourth product and it is being brought in the MPV segment. The Kia Carens is to be brought in five variants and 6 and 7 seat options, along with a choice of three engines.

Kia Carens is to be brought in a choice of five variants which include Premium, Prestige, Prestige Plus, Luxury and Luxury Plus. This MPV will be brought in 6 and 7 seater options. It is going to be based on the company’s global design language, the main headlight is placed under the thin lights, it will get LED DRLs, its DRLs are similar to the other models of the company like the Sportage.

Large wheel arches can be seen on the side and body lines that run from front to end. A similar line starts at the front headlight and ends at the front door. At the same time, such a line exits from the rear door and ends by going to the taillight. Its LED taillights look very new which has not been seen in any model of Kia till now.

In terms of size, it is going to be 4,540 mm long, 1,800 mm wide, 1,708 mm high and will have the longest wheelbase of 2,780 mm in its segment. At the same time, these 8 color options include Imperial Blue, Moss Brown, Sparkling Silver, Intense Red, Glacier White Pearl, Clear White, Gravity Gray and Aurora Black Pearl.

A large touchscreen infotainment system can be given in this car, while its lower variant gets a 10.25-inch touchscreen infotainment system. Its instrument cluster will be completely digital and its steering wheel feels like a Seltos. This includes new generation Kia Connect with 66 connected car features, Bose sound system with 8 speakers, 64 color ambient lighting.