Kia Carens MPV starts arriving at dealerships, may launch in the Indian market this month 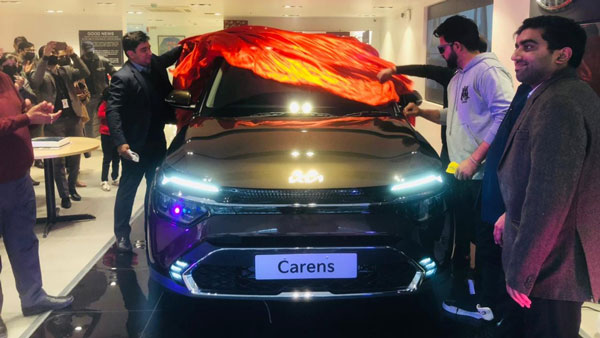 The production of the Kia Carens series has started at Kia India’s Anantapur facility. Recently, pictures of the new Kia Carens MPV arriving at the dealership have surfaced. It can be seen in the pictures that the Kia Carens has been finished in Moss Brown shade, which is a new paint scheme from Kia.

The model here is likely to be one of the high-spec Luxury or Luxury Plus trims, as it uses LED headlights and taillights, fog lamps and 16-inch dual-tone alloy wheels. Where the base-spec premium trim will come with Black and Indigo seats.

On the other hand, black and beige seats will be used in its mid-spec Prestige and Prestige Plus variants. Kia offers the range-topping Luxury and Luxury Plus trims with Triton-navy and beige interiors, as can be seen in the images revealed.

The Kia Carens MPV will be made available in both 6 and 7-seating options. Captain seats in the second row will be used for the first setup. Apart from this, some features can also be seen on the dashboard of Kia Carens in some of its pictures.

The Kia Carens MPV gets a digital driver display, a 10.25-inch touchscreen infotainment system, auto climate control with rear and roof mounted AC vents and even push-button start/stop. Other features include a one-touch electric tumble down feature for the second row seats.

The second engine available in this will be a 1.4-litre, four-cylinder, turbo-petrol engine. This turbo-petrol engine churns out 140 Bhp of power and 242 Nm of peak torque. This engine will be used with 6-speed manual and 7-speed DCT gearbox.

Apart from this, talking about its third engine, 1.5-litre, four-cylinder diesel engine will be used in it. This diesel engine produces 115 bhp power and 250 Nm peak torque. This engine will get 6-speed manual and 6-speed automatic gearbox.

The Kia Carens MPV will be sold in five trims, which include Premium, Prestige, Prestige Plus, Luxury and Luxury Plus. Kia India has started booking the new Kia Carens MPV and it can be booked online or at any Kia dealership with an advance amount of Rs 25,000.