Kia Carens disappointed in terms of safety, got 3-star rating in crash test 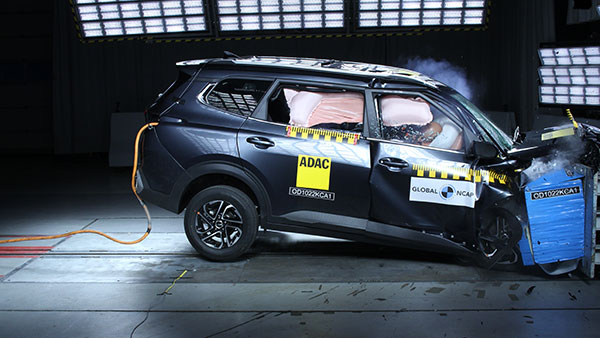 Alejandro Fures, Secretary General, Global NCAP, said, “Global NCAP welcomes Kia’s decision to make six airbags a standard safety feature in Cairns. However, we expected better performance from this model. It is a matter of concern that Kia Like global car brands, which usually enjoy 5-star ratings in other markets, are yet to reach this level in India.”

The Global NCAP crash test found that the Kia Carens MPV’s structure is not stable. Also the driver’s chest and leg protection is weak. The agency found that Kia Cars are still being sold with lap belts in the rear middle seating position instead of three-point seatbelts. Kia Cares scored 9.30 out of 17 marks in adult safety and 30.99 out of 49 in child safety. This model was tested at a speed of 64 kmph.

The last Kia model tested by Global NCAP was the Seltos, which got 3 stars for adult safety and 2 stars for child safety. This model of Kia Seltos was equipped with standard features like two airbags and pretensioner ABS braking but the Seltos performed poorly due to unstable body shell.

What is Global NCAP?

Global NCAP (Global New Car Assessment Program) is an organization that independently provides ratings for new cars by crash testing them on several parameters. This organization gives a rating of 0-5 stars to the tested cars. Global NCAP rating is very important for car companies because getting the rating leads to better marketing of cars.

Technically, cars that get the lowest rating or stars in this crash test are not considered safe at the time of an accident. Tested cars are rated 0-5 stars. Cars with one to three star ratings provide the least safety in the event of an accident, while cars with ratings 4 to 5 are the safest. Crash test ratings are divided on several parameters including adult safety, child safety. Inside the car, human-sized puppets are placed on the driver’s seat and passenger’s seat and the impact of the crash on them is examined.

Let us tell you that within just 2 years of the launch of Kia Sonnet, the company has sold 1.5 lakh units. The carmaker said sonnets contributed to more than a third of sales. Presently, Sonnet is the only model selling more than 32 per cent of Kia India. The company also said that 26 percent of customers who buy Sonnets prefer to buy the top model. Sonnet holds 15 per cent share in India’s most popular and rival compact SUV segment under 4 metres.

Kia Sonnet was launched in 2020. This was the second car from the brand after the Seltos. Kia claims that 25 per cent of the sold models of the Sonnet are models with iMT gearboxes. On the other hand, customers are liking Sonnet’s Glacier White Pearl and Aurora Black Pearl the most. The Kia Sonnet competes with the Tata Nexon, Nissan Magnite and Renault Kyger in its segment.