Just look at the talent! Tata Nano was made a helicopter, the name of this village became bright 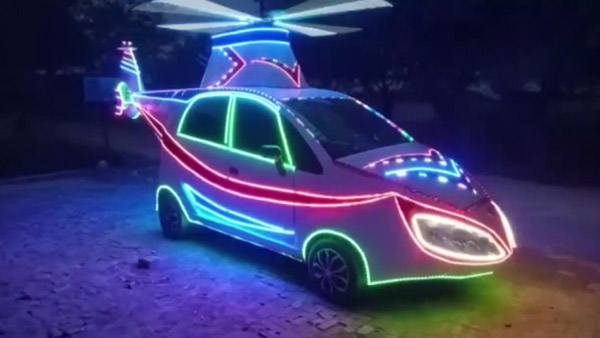 Indians are known worldwide for their creativity. The people here are known to ‘jugaad’ everything. It is a colloquial Hindi term, pervading the Indian psyche. Jugaad means easy and improvised.

Using his ingenuity, a man from Uttar Pradesh’s Azamgarh has converted his Tata Nano car into a flying machine. A carpenter by profession, this person has given the structure of a helicopter to his simple Nano. To replace which he has spent more than Rs 3 lakh.

He said that “I made this only to popularize my village and district. We just want government and big companies to help us and make our dreams fly. My dream is to make such helicopter in future which Water can fly on the roads and in the sky.

Salman apparently wanted to convert his Tata Nano into a helicopter to provide the experience of flying to his villagers who could not afford to fly on aeroplanes. Significantly, Salman’s car-cum-helicopter doesn’t actually fly and can only move on the road like a normal car.

Salman’s car-cum-helicopter has gone viral on Twitter. Many Twitter users are in awe of his boundless imagination and his overwhelming spirit of persevering in the face of overwhelming adversity. Interestingly, a real flying car has been developed in Slovakia.

The hybrid car-aircraft known as the AirCar has been developed by Klein Vision, a flying car inventor based in Nitra, Slovakia. The Aircar has also been issued with a Certificate of Airworthiness by the Slovak Transport Authority. The aircar is powered by BMW engines and is capable of hitting speeds of over 160 kmph and flying at altitudes above 2,500 metres.