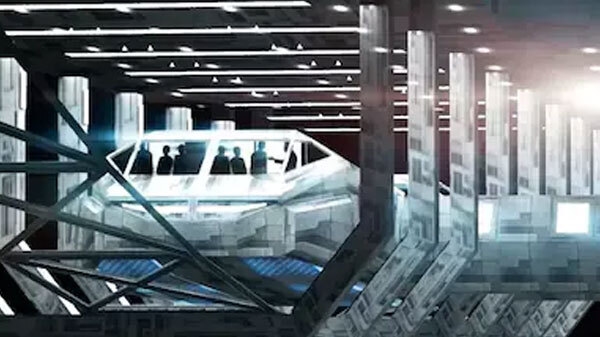 Now bullet train will run in the sky : Talking about giving the first bullet train to the world, Japan has given it, everyone knows about it. At the same time, scientists from Japan are planning to run bullet trains on the Moon and Mars as well. Researchers from Japan’s Kyoto University and Kajima Construction are planning to create an artificial space environment on the Moon and Mars. This means that it would be possible for humans to reside in a particular area there. Scientists are working on the concept of bullet train to travel there. For this, work is going on on a transportation system named ‘Hexagon Space Track System’.

Space agencies of many countries are preparing their missions regarding Mars. The US space agency NASA is also exploring the possibilities of life there through its spacecraft. But researchers from Japan are working one step ahead. According to the project, a mini capsule with a radius of 15 meters will connect the Earth and the Moon. After this, a capsule of 30 meters radius will be used to connect the Moon and Mars.

This project will be completed by year 2050

Researchers believe that this is not a preparation for a few years. This project is going to take a long time. He said that the project is expected to be completed by the year 2050.

Other countries have no such project

In a press conference recently, Yosuke Yamashiki, director of Kyoto University’s SIC Human Spaceology Center, said that there is no such plan in the space development plans of other countries. Our plan ensures that in future humans will be able to go to space. Takuya Ono, a senior researcher at Kajima Construction, who is collaborating on the project, said that we are committed to completing this project and it will be very useful for humans in the future.

Because the atmosphere of Mars is not fit for human habitation, there is also a plan to build a glass habitat on Mars under the project. That is, it will be a kind of cover, within which people will get the same atmosphere as the earth. Those who want to get out of this habitat, they will have to wear a spacesuit. Scientists hope that before the end of this century, humans will start moving on the Moon and Mars.

Artificial environment will be created

The project of this Artificial Space Habitat has been named ‘The Glass’ by Japanese researchers. Under this, Japanese scientists are working on an ambitious plan to build a 1,300 feet structure on the moon. It will be a conical living structure with artificial gravity. Where public transport will be built. This environment located on the Moon will be called “Luna Glass”, while this habitat located on Mars will be called “Mars Glass”.

It will take 120 years to complete this project

Talking about the project, it may take around 120 years to complete. A simplified version is planned for completion by 2050, The Independent reported, while it could take another 70 years to become a full success.