IT company gifted 6 Kia Seltos SUVs to its employees, know in detail 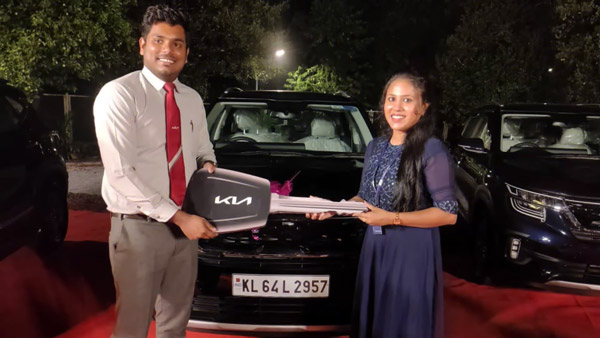 The name of this IT company is Jobin and Jizmi IT Services. The company was started ten years ago, only then these six employees are working in this company. In view of their work, the company gave Kia Seltos SUV as a bonus to those 6 employees. These SUVs have been given to these employees by the company’s founders Jobin Jose and Jizmi on the occasion of the company’s tenth anniversary.

While talking to the media, Jobin and Jizmi said that we have no words to describe the role of these six people in the company. He has been with the company since its early days. The company started ten years back with just two employees and till now, has grown to 200 employees.

Apart from these Kia Seltos SUVs, the Royal Enfield Meteor 350 has also been awarded to the best performing employee in the last year. The cost of all these 6 SUVs is around Rs 1.20 crore. The company has not disclosed which variants of the Kia Seltos have been rewarded to the employees.

However, depending on the overall valuation of the awards, all the SUVs could be the top-spec HTX+ or GTX+ variants of the Kia Seltos. The SUV comes with three engine options – a 1.5-litre 113 Bhp petrol engine, a 1.4-litre 140 PS turbocharged petrol engine and a 1.5-litre 115 PS diesel engine.

However, for those who did not want the car as a gift, the drummer rewarded them with a flat or cash of the same value. The diamond merchant also gifted 1,200 units of the Datsun redi-GO hatchback to his employees on the occasion of New Year. Savji Dholakia later announced a cut in the bonus.