Is the CNG version of the Kia Sonet coming soon? Could be available with turbo-petrol engine 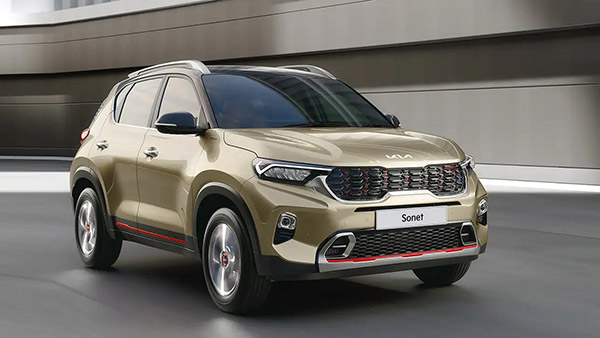 While the company is starting to take the upgraded Kia Sonet to its dealerships across the country after its launch, Kia India has now started testing the CNG version of the compact SUV. It is believed that the Kia Sonet CNG can be included in the line-up of Kia India in the coming months.

After this update, the Kia Sonet CNG will be the first Kia car to come with a factory-fitted CNG kit in India. Let us tell you that recently the new Kia Sonet CNG was spotted during testing and its CNG version was revealed from the CNG sticker on its rear windshield.

The model seen during testing was the GT Line variant of this SUV. For information, let us know that the company is selling the Kia Sonet GT Line trim in the market with 1.0-litre turbo petrol and 1.5-litre turbo diesel engine options. It is believed that only the 1.0-litre turbo-petrol engine can be used in its CNG model.

What’s more, the Kia Sonet could possibly be the first car in India to feature a turbo-petrol engine with CNG fuel option. Some time back it was revealed that Maruti Suzuki is also giving a major update to its compact SUV Maruti Vitara Brezza.

While according to the reports, the company is going to remove the word ‘Vitara’ from the name of this SUV, on the other hand it is also being said that this car will also be offered with CNG option. However, in this the company will use the new 1.5-litre DualJet petrol engine, which was recently given in the new 2022 Maruti Ertiga.

Talking about the 2022 Kia Sonet, the company has launched this car at an initial price of Rs 7.15 lakh (ex-showroom). The company has introduced many existing features from its higher variants to the lower variants. With a greater focus on safety, side airbags have been added to the refreshed Kia Sonet.

Along with this, 4 airbags have been introduced in all its lower variants. The company has introduced the new Kia Sonet in two new color options, ‘Imperial Blue’ and ‘Sparkling Silver’. The Kia Sonet has been updated with 9 new enhancements.

To enhance its safety, the company has equipped it with side airbags and Highline Tire Pressure Monitoring System (Highline TPMS). Key safety features such as Electronic Stability Control, Vehicle Stability Management, Brake Assist, Hill Assist Control are also offered as standard on the iMT trims of the new Kia Sonet.