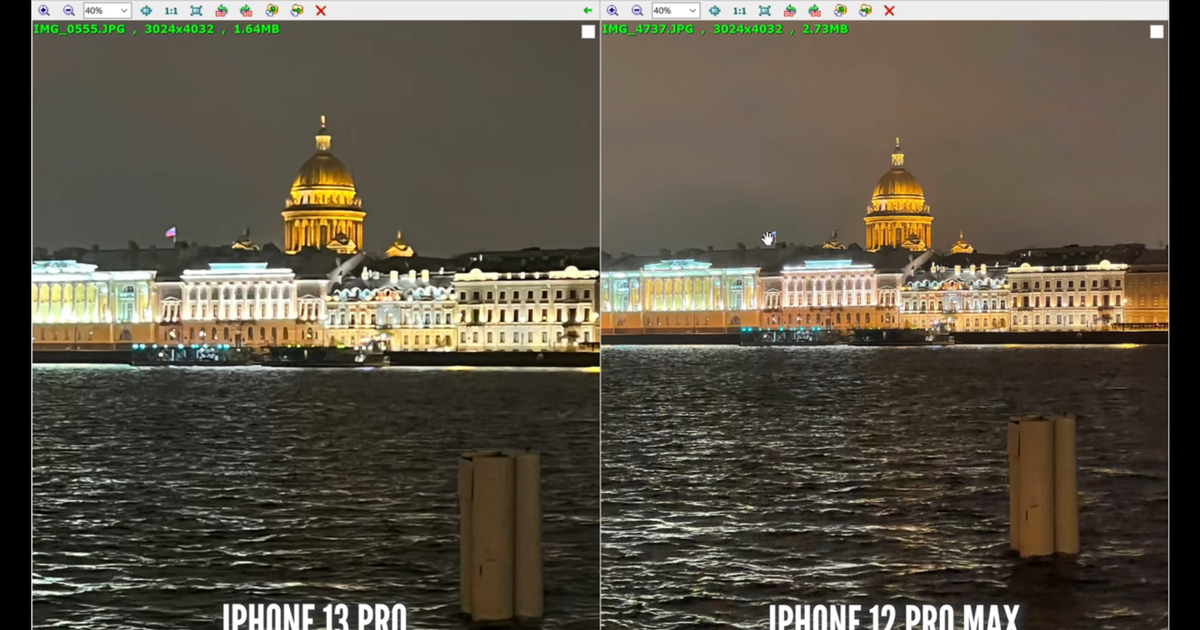 As for the photographs, during the review, parameters such as color rendition, image clarity, HDR and white balance were important.

The presenter began with pictures of the starry sky. It came out slightly better in quality in the 13 Pro: the stars are tinted blue, while in the 12 Pro Max it is just white. In addition, night and evening photos are generally less yellow, more natural, which means that the white balance on the iPhone 13 Pro also works better.

Another 13th model differs in that it gives less noise in the photo in low light compared to the previous generation model. But in terms of detail, the devices are often very similar.

Portrait photos come out almost the same during the day. Unless at times there is a slight difference in terms of details: often here the iPhone 13 Pro also has an advantage.

At the same time, in the evening hours it is already quite noticeable that pictures of people are better obtained on the 13th iPhone. Including in terms of image clarity.

The progress of the new model is also visible in the photo, where a person stands against the light. The colors are already coming out in the picture, more contrasting and saturated, there is no “haze”, as in the 12th.

The expert also stressed that for him personally, the increase in portrait photography with the 13 Pro is not suitable: it is quite large. However, the detail and color rendition of the novelty has improved markedly.

It is impossible not to say about the new macro mode, which appeared in the 13th version. At the same time, if we compare the macro photo with the photo on the iPhone 12 Pro Max with optical magnification, then it is almost impossible to find any differences.

The 13 Pro’s sunset photo shows highlights. And there are even a little more of them than the 12 Pro Max. The rest of the pictures of nature and architecture in the evening and during the day are identical.

Indoors in artificial bright light, oddly enough, the iPhone 12 Pro Max showed the best results. In the photo from the 13th, strong highlights are noticeable. But if you shoot shop windows, then you will see that the 13th is doing better with bright light.

At times, at night, when shooting architecture on the 13th, the telephoto did not turn on. Therefore, the 12th iPhone sometimes shot much better in these conditions. In general, with a lack of lighting, the images come out quite similar on both devices.

Finally, a selfie photo. Everything is ambiguous here. At times, the iPhone 12 Pro Max wins in detail, and at times the 13 Pro. At the same time, the 13th copes better with the highlights in the background.

In terms of photo quality in all conditions except Night Mode, the iPhone 13 Pro shows a noticeable improvement. When it comes to night shots, sometimes the iPhone 12 Pro Max does better than the 13th generation iPhone.