Intel has shared details about the energy-efficient Alder Lake mobile processor models that are available in the P and U series. The manufacturer also confirmed that the first laptops based on them will go on sale next month.

Unlike last month’s high-performance Alder Lake H-series mobiles with a nominal TDP of 45W, both of the above series of energy-efficient 12th generation Core chips are intended for use in thin and light laptops. 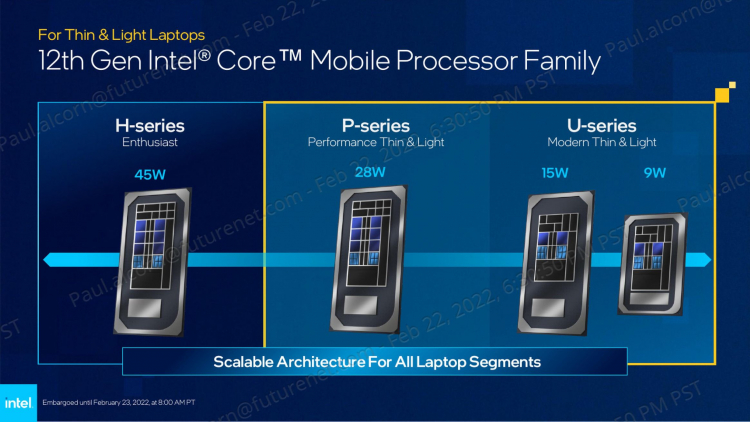 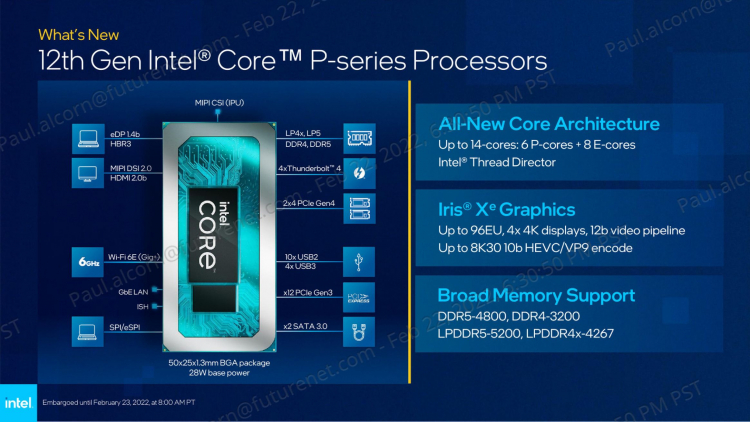 The older models of the P-series, like the flagship of the H-series, the Core i9-12900HK processor, will be able to offer up to 14 cores (6 performance and 8 energy efficient) and 20 threads, as well as integrated Iris Xe graphics. In turn, the older models of the U-series will receive two productive and eight energy-efficient cores. 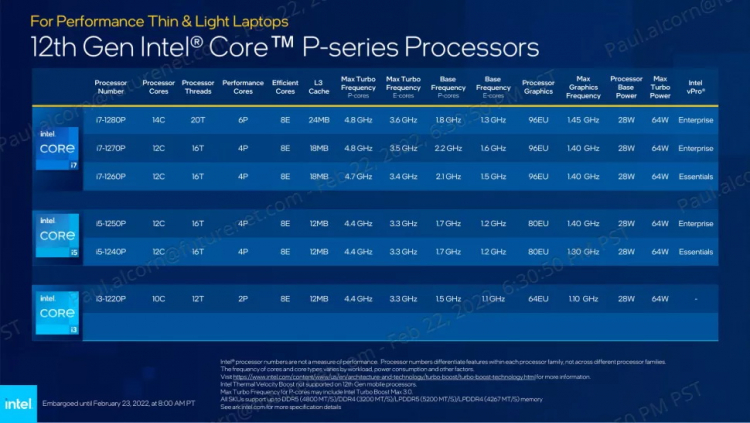 P-series chips have a nominal TDP of 28 watts, but in turbo mode, peak power consumption is declared at 64 watts. They will be able to offer higher multi-threaded performance than the U-series models in heavy workloads such as video encoding and rendering, but at the same time provide faster performance in simpler tasks such as web surfing and office applications, where a large number of computational threads is not required. 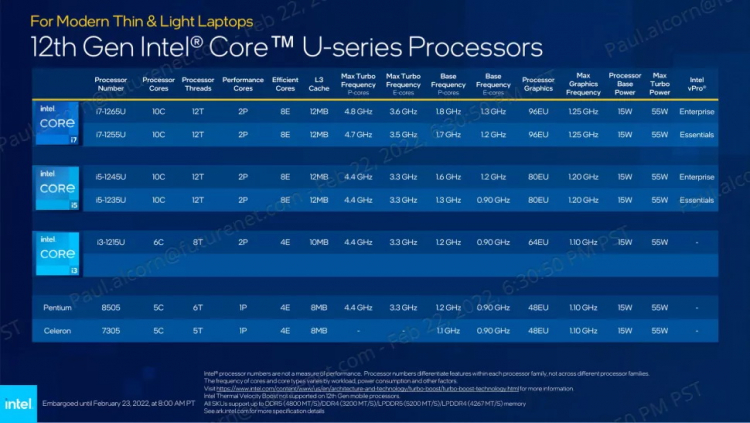 U-series processors are represented by two subclasses. The first one includes chips with a nominal TDP of 15 W, and consumption in turbo mode up to 55 W. For such processors, the number ends with the number “5”, for example, Core i7-126 5 U. The second subclass includes models with a base TDP of 9 W and a maximum power consumption of 29 W. They have a “0” at the end of the number, like the Core i7-126 0 U. As a result, these chips will offer lower base and maximum clock speeds, as well as a reduced frequency of Iris Xe integrated graphics. 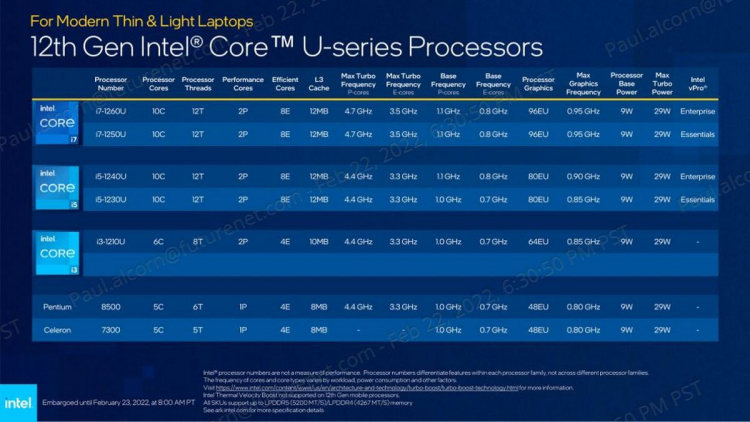 The company has shared some performance metrics for the new P- and U-series mobile processors based on its internal benchmarks. The first Spec graph (pictured below) shows the relative performance of the new Intel processors, taking into account the power consumption figure, against the background of competitors. The comparison involved the Apple M1 chip, a representative of the previous Intel Tiger Lake series, as well as the Ryzen 7 5800U model. The choice of the latter is explained by the fact that at the time of the tests, the AMD Ryzen 6000 chips introduced last month were not available. 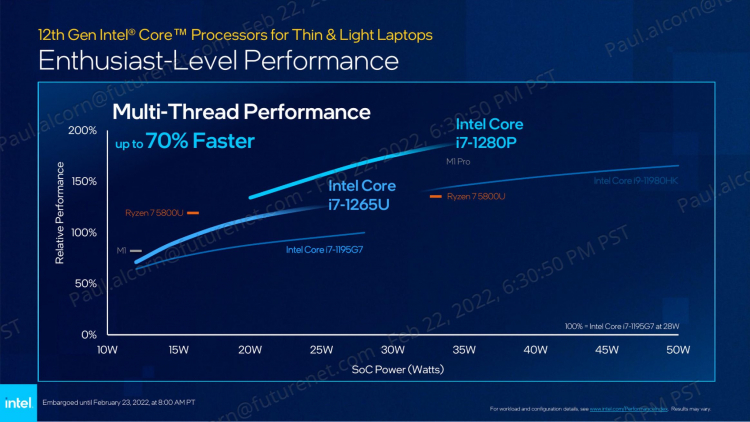 Alder Lake P-series processors are up to 70% faster in multi-threaded performance than the Tiger Lake flagship Core i7-1195G7 rated at 28W, according to Intel. In turn, the Alder Lake U-series models are up to 30% faster than the previous generation. It should be noted that Intel claims a 70% superiority of new generation chips over their own processors of the previous generation, and not over AMD and Apple solutions. Blender, WebXPRT 4 (browser test), PugetBench for Photoshop, and the CrossMark benchmark, which is a comprehensive test of the entire system in certain tasks, were also used to test the single-threaded and multi-threaded performance of the new chips. 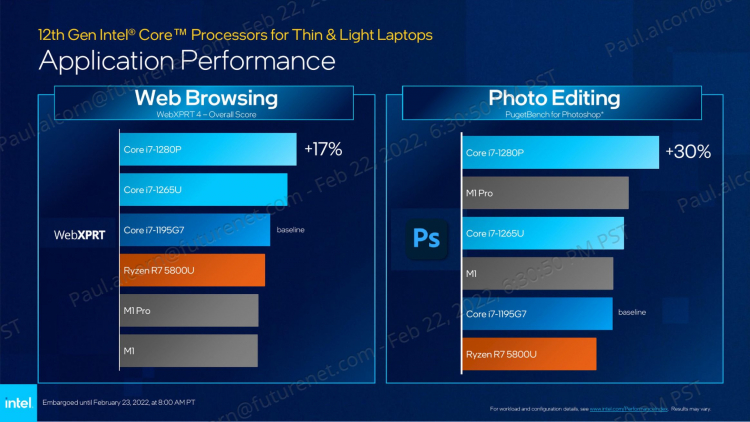 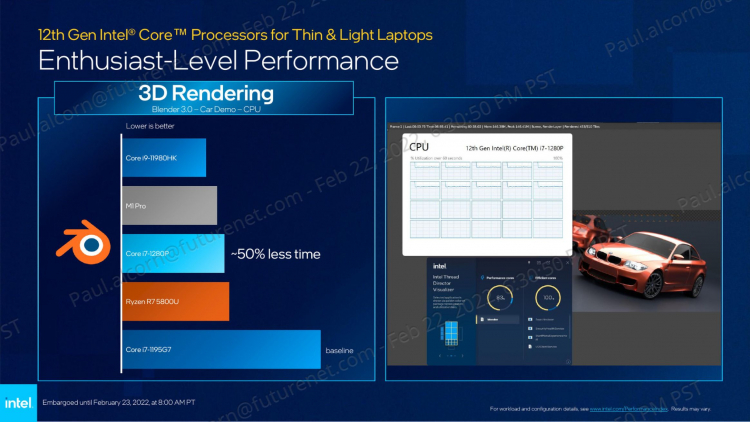 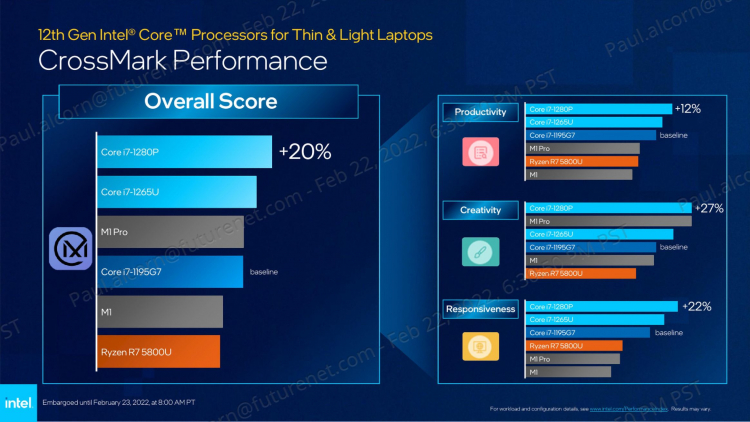 Since the Alder Lake P- and U-series processors use the same integrated GPU as the Tiger Lake chips, we should not expect significant performance changes here. However, the company has provided performance data for the new chips’ integrated graphics in some games at 1080p using medium to high picture settings. 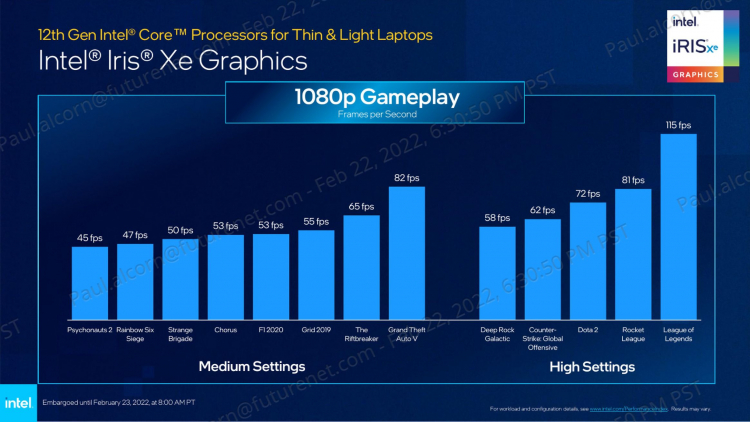