INS Vikrant to be inducted into Indian Navy on September 2, PM Modi will show green signal 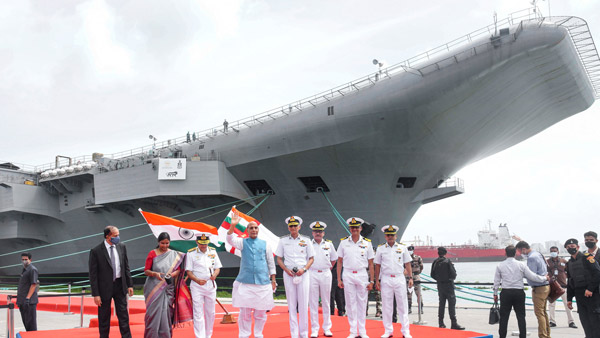 Let us tell you that 20 thousand crore rupees have been spent in making this aircraft carrier. Its weight is about 40 thousand tons. The Navy will be handed over the aircraft carrier in the presence of Prime Minister Narendra Modi during the ceremony.

According to PTI, this indigenous aircraft carrier has been designed by the Indian Navy’s Directorate of Naval Design (DND) and built by CSL, a public sector shipyard company under the Ministry of Ports, Shipping and Waterways.

It is named after India’s first aircraft carrier that played a key role in the Indo-Pak war of 1971. According to the information, Vikrant Aircraft Carrier will work to strengthen India’s position in the Indian Ocean Region (IOR).

These are the features

It is said to have more than 2,300 coaches, which are designed for a crew of about 1,700 people. It also has special cabins for women soldiers. Vikrant has a top speed of around 28 knots and can move at a speed of around 17 knots. At the same time, it can travel up to 7,500 nautical miles at a time.

The aircraft carrier will have an air component of 30 aircraft, which will include MiG-29K fighter jets, Kamov-31 aerial early warning helicopters and the soon to be joined MH-60R multi-role helicopters, apart from indigenous light helicopters.

This aircraft carrier is 262 meters long, 62 meters wide and 59 meters high. Its construction started in 2009. Its flight deck is equal to two football fields. It is fitted with eight generators which is enough to light an entire city and the warship also has a dedicated hospital complex with all facilities.

The Indian Navy took delivery of the carrier on July 28 from CSL after successfully completing the fourth and final phase of sea trials last month. As per reports, 1500-2000 people are estimated to attend the opening ceremony.