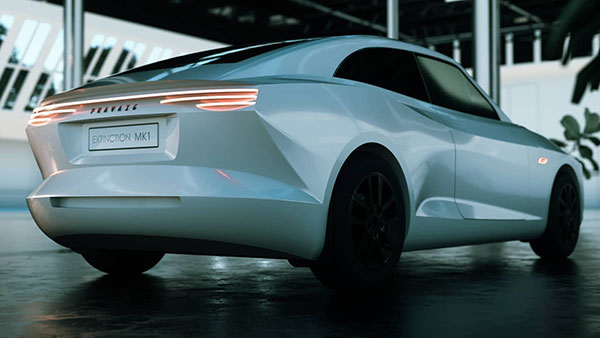 In the teaser, the company has given a glimpse of the back profile of this SUV, in which the sharp designing of the rear can be seen. The logo of Pravega has been given in its boot door, on which a backlight LED strip has been installed. This light strip connects both the tail lamps giving it a luxurious look from the rear. The rear windscreen of the rack design has been given at the rear of the SUV.

Looking at the back design, it can be expected that the front design will also be quite sharp and sporty. The company has claimed that this vehicle can be charged from 0 to 80 percent in just 30 minutes. According to the company, the battery used in the SUV can last up to 1 million kilometers. At the same time, it will also be strong in terms of safety. Praveg’s electric SUV will come with a 5-star safety rating.

Let us tell you that Praveg had revealed its concept electric sedan in January last year. The company named it Extinction Mk1. The company had also revealed that the Extinction MK1 will be a luxury sedan and the company will sell around 2,500 units every year.

The Praveg Extinction MK1 is powered by a 96kW battery. The electric motor of this car is capable of producing a maximum power of 200 bhp. In terms of range, this car can compete with Tesla’s electric car.

According to the company, the Extinction Mk1 can provide a range of 500 km on a single charge, at this range this car will easily compete with Tesla’s electric cars.

The Praveg Extinction Mk1 can accelerate from 0-100 km/h in just 5.4 seconds. If we look at the other electric cars that compete with this car, the Hyundai Kona EV offers a range of 452 kms, the MG ZS EV 340 kms and the Tata Nexon EV 312 kms on a single charge.

Praveg is preparing to foray not only in the domestic market of India but also in the international market. The Pravega’s first electric SUV could be a global product that could be sold in the US and Europe markets including India. The company will reveal more details about the SUV in the coming days.