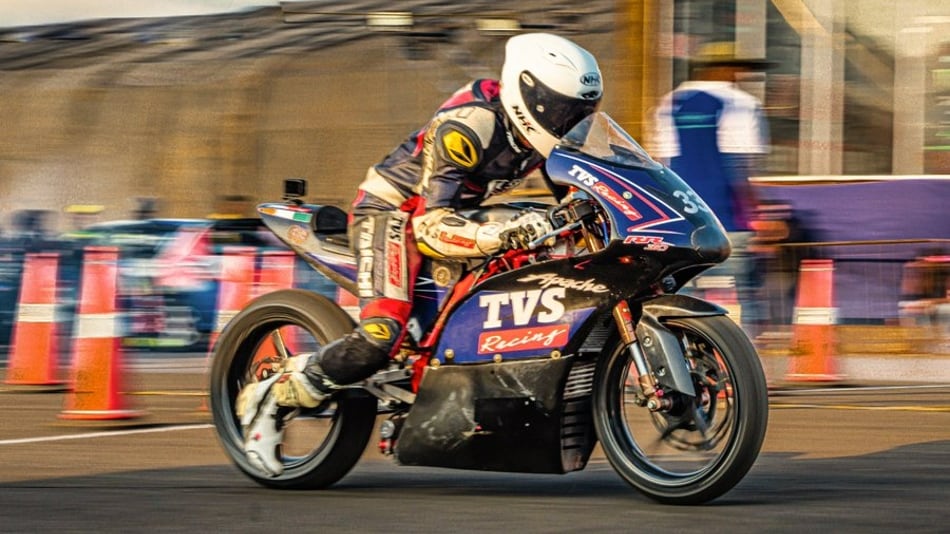 TVS Motor Company’s flagship motorcycle Apache RR 310 is popular for its sporty looks and balance comfort and power. Now, the company’s bike has beaten the fastest quarter-mile drag race time set by the Yamaha RD350. Of course, many major changes were made to the bike for this race, but its design and most of the parts were retained.

The Drag-tuned TVS Apache RR 310 made its debut in Valley run drag race. It set a new record doing the standing quarter mile in 11.5 seconds and achieving a trap speed of 195 km/ph with Jagan Kumar finishing at 11.5 seconds and K Y Ahamad at 11.9 seconds. pic.twitter.com/lGErH107rd

TVS Racing’s 10-time INMRC champion Jagan Kumar recorded an astonishing 11.523-second quarter-mile time in the drag race. At the same time, KY Ahamed finished second with 11.996 seconds. For this, the biggest change on the TVS Apache RR 310 was its engine. The power generation of the engine used during the race was almost double that of the original road version bike.

Not only this, the weight of the RR 310 bike was also reduced for this record-breaking run. The race version weighs 109 kg, which TVS says is 9 kg less than the company’s Asia One Make Championship race-winning bike.

The engine of the drag race RR 310 version generated 62 bhp power during the race. Since the engine was turbocharged and included an intercooler and electronically controlled boost, the bike achieved speeds of close to 200 kmph in a matter of seconds.

The bike was made equipped with new suspension. Not only this, TVS says that different spring rates and damping were kept in this version. The front forks were kept lighter and shorter. TVS used lightweight materials like carbon wheels, carbon fiber bodywork and subframe/seat. A new lighter swingarm was fitted, which was 30 mm longer. In addition, there was also a lighter rear disc plate and calliper, a smaller radiator, and a smaller and lighter front tyre.