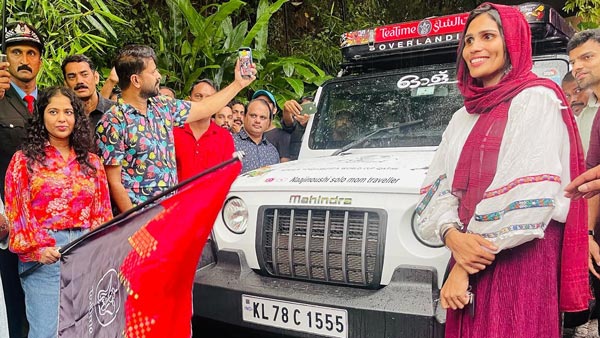 One such football lover from Kerala is Nazi Naushi. She has plans to watch the finale of the 2022 FIFA World Cup, but she is doing it in a slightly different way. In fact, Nazi is planning to drive from India to Qatar in his Mahindra Thar SUV to watch the final match.

Naji Nushi has recently started her journey from Kannur which has been flagged off by Kerala Transport Minister Antony Raju. With this, adventure travel from Kerala to Qatar has started, which may take months. Naji has always been a fan of traveling, but this is the first time she is doing something like this.

Naji is married to Naushad who is an NRI. Naji is a mother of 5 children and her husband and children are encouraging her to travel more. Naji Nushi also has a YouTube channel and has already done four travel series including All India Yatra. Nazi has completely decorated his car Thar on the theme of 2022 Qatar FIFA World Cup.

Naji holds an Oman driving license which has already been converted into an international driving license. She plans to drive a car from Kerala to Mumbai via Coimbatore and after reaching Mumbai, the Nazi and Mahindra Thar will board a ship for Oman.

Once she reaches Oman, she will continue her journey in Thar and cover Arab countries including UAE, Bahrain, Kuwait, Saudi Arabia before reaching Qatar. This is the first time a woman from Kerala is going on such a road trip. She has left here with a plan to reach Qatar by December 10.

Talking to the media agency, he said that he is a supporter of Argentina and a big fan of Lionel Messi. She really wants Argentina to win the cup this year. She also wants to see the Indian football team in the FIFA World Cup one day. The Nazis will remain in Oman until December 31.

Nazi has turned his Thar into a mini home on wheels to plan a road trip. He plans to park Thar at night near toll plazas and petrol pumps and he also has essential cooking supplies in Thar. It also gets a rooftop tent for a comfortable sleep.

This is the first time a woman from Kerala is exploring GCC countries in a vehicle made in India. Many women who are dreaming of traveling alone in India or abroad can find inspiration from Nazi Naushi.