Indian Army got Kalyani M4 armored vehicle, even 50 kg IED blast will not spoil it 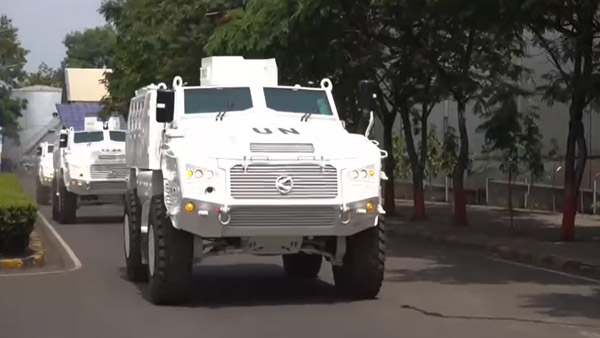 Kalyani M4 is a quick reaction fighting vehicle capable of carrying an infantry platoon in full combat gear. The company says the vehicle successfully completed a series of rigorous tests in some of India’s harshest environments, including the cold terrain of Leh and Ladakh and the unforgettable Rann of Kutch.

The combat radius of the Kalyani M4 is around 800 kms, which will help in increasing the combat power in the shortest possible time across all types of terrain. It is equipped with state-of-the-art military-grade power that will keep you alert at all times.

The vehicle is capable of withstanding three 10 kg TNT charges under its wheels and a 50 kg IED blast on one side. According to Col Rajinder Bhatia (Retd), Chief of Defense Business, Kalyani Group, this capability is equivalent to STANAG-3 rated protection for crew and infantry soldiers.

It allows 10 soldiers to travel safely while avoiding explosive devices buried in woods and mud roads. It is equipped with modern optics and sighting equipment which helps in keeping the crew alert. This APC is based on Cummins’ 460 horsepower engine.

Recently, the Indian Army’s Northern Command inducted the Kalyani M4 into its fleet of armored vehicles along the Sino-India border. Earlier, Pune-based Bharat Forge had also provided ambulances and command post vehicles to the Indian Army.

Amit Kalyani, Deputy Managing Director, Bharat Forge Limited, said, “The Kalyani M4 has been given an ergonomic design for the safety and performance of the crew to enable the crew to perform their tasks efficiently.”

The Indian Army holds the record for the largest contribution to United Nations Peacekeeping Operations (UNPKO) across the world. Captain Gurbachan Singh Salaria displayed gallantry in the 1961 war with the Congolese rebels, for which he was awarded the highest gallantry award, the Param Vir Chakra. Even until recently, Indian teams used to go to international peacekeeping missions.