India will make its own framework regarding the future of Internet, said the Minister of State for IT 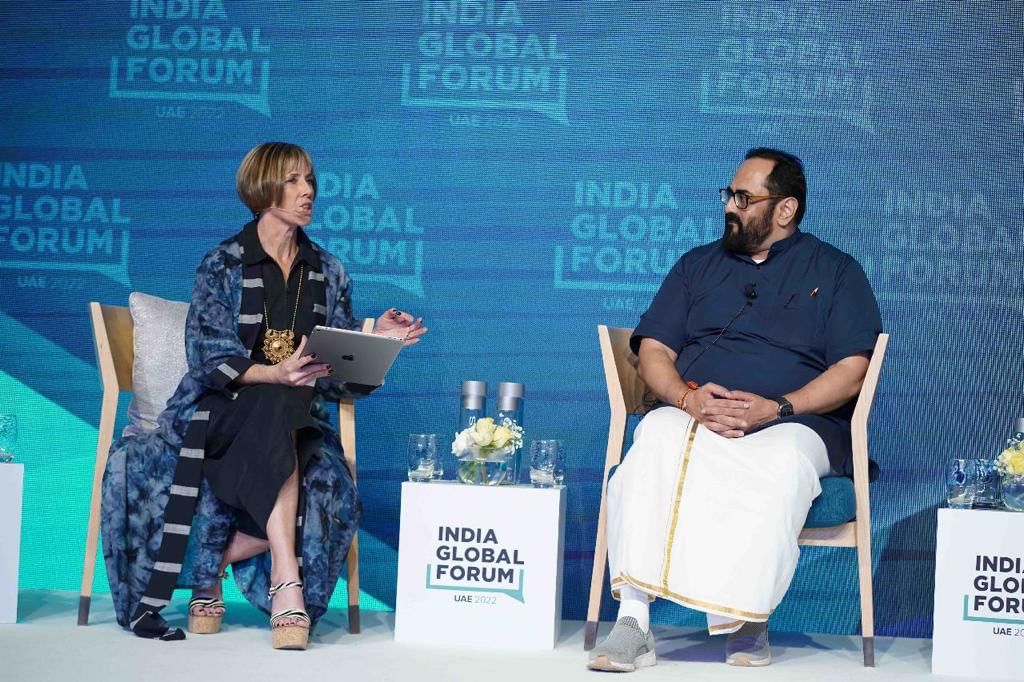 Presiding over a special session with Mr. Omar Sultan Al Olama, Minister of United Arab Emirates during an event in Dubai on behalf of India Global Forum, Rajeev Chandrasekhar said that the future framework of internet will be prepared by India itself. Union Minister of State for Electronics, Information Technology and Skill Development and Entrepreneurship Shri Rajeev Chandrasekhar said that India does not need to follow any other country or global practice to make policies regarding Internet in the future. There are 82 crore internet users in India, with this India is the most used country of global internet. He said that we should get a chance to shape our policies. So we will take our own decision and make our own framework for the internet.

Rajeev Chandrasekhar said: There is an opportunity for developing countries to take advantage of India’s stack. Referring to the Bharat Stack, Shri Chandrasekhar said that the Bharat Stack has helped in maintaining trust between the government and the citizens in the country. Due to this, the problems of transfer have been removed and it has become easy to get the benefit of government funds. Other countries can also adopt India’s stack. Discussing the Digital Personal Data Protection Bill, which was recently made public for public consultation, the Minister of State for IT said that it is the duty of the government to protect the digital rights of its citizens.

Other countries can take advantage of the Indian stack: Rajeev Chandrasekhar said that we do not believe that this should have any effect on the ecosystem of innovation happening in India. He said that the government is committed to make the internet open, safe and reliable and accountable. He said that this is a better opportunity for countries in the Global South (developing countries) or those who cannot afford digitization in the time of rapid digitization, to take advantage of the Indian stack.

Olma appreciates India’s stack: Appreciating India’s stack on this occasion, Mr. Olma said that India did not emulate anyone. He has made his own way which many countries are following. I don’t know how amazing it is! That a country as big as India is able to do something like this in less than a decade is state of the art.

The Digital India Act will replace the IT Act: Earlier in conversation with NDTV, sitting side by side with IGF, Shri Rajeev Chandrasekhar said that provisions have been made in the upcoming Digital India Act to crack down on misinformation being weaponised and cyber attacks taking place today. Will go The Digital India Act will replace the existing IT Act. The Minister of State for IT also said that due to the proliferation of clouds and unlimited internet, data goes across the Indian border everyday. So we will identify trusted geographic areas or trusted corridors where data can be collected and processed to see that data for all Indians remains safe.