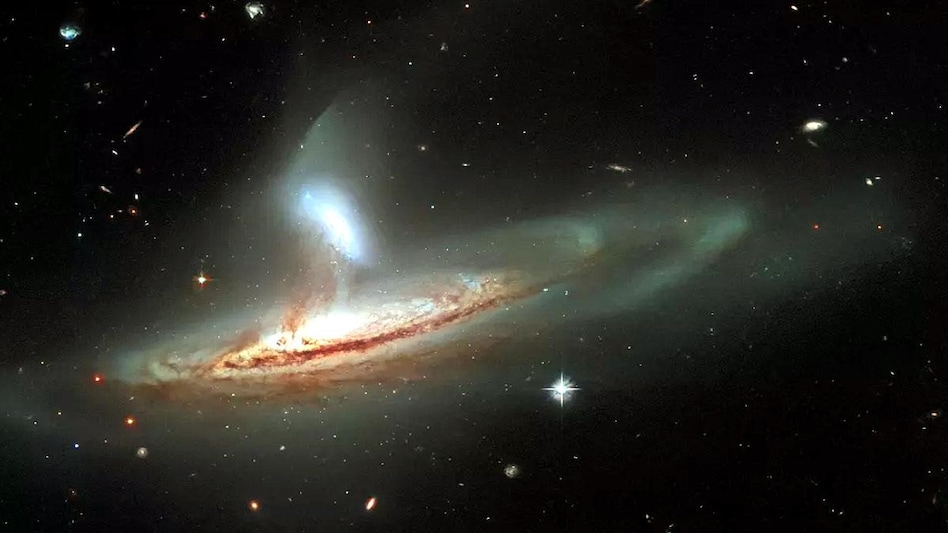 The job of science is to make the impossible possible. All it takes is the right technique and patience. The technology is well with the Hubble Telescope, had to be patient to come at the right angle. Because he had to take pictures of two galaxies that were on top of each other in different directions. Was dancing too. At the same time, their parts were spread in all three directions. It was not easy to bring such a complex structure into one picture.

Fortunately, the Hubble Telescope reached the right angle. From there he saw that two galaxies inside the Andromeda Constellation, about 32 million light years away, are bound together due to their respective gravitational forces. are spinning fast. Without wasting time, the Hubble Telescope took pictures of these two galaxies. Along with this, the three-dimensional details of both the galaxies were captured in this picture.

The name of the vertically standing small galaxy seen in the picture is Polar-Ring Galaxy IC 1559. The name of the large curved galaxy under it is NGC 169 (NGC 169). Together these two are called Arp 282. i.e. Halton Arps Atlas of Peculiar Galaxies.

The Hubble telescope was at the perfect angle to capture this nearly impossible shot of two ‘dancing galaxies’ https://t.co/pdmGp96yIA pic.twitter.com/VG8Ox3iQN9

NASA officials issued a statement saying that it is not a big deal for galaxies to dance together in this way. Astronomers study the process of meeting galaxies. They meet, collide. with explosion. Every event has a different meaning. Due to which their shape and behavior change. It was very difficult for Hubble to take this picture. Because these two galaxies were intermingled differently.

Arp 282 was in three dimensions. Along with this, there is also a group of many stars around it. There is dust too. There is gas too. But the Hubble Telescope was in such a right place that it could take accurate photos of these two galaxies. However, this was also difficult because the Arp 282 is also bent at a certain angle. If the telescope was below or above NGC 169, would such a picture have been obtained? Doesn’t get it at all. The Polar Ring Galaxy is not visible. Or it was seen mixed in a big galaxy.