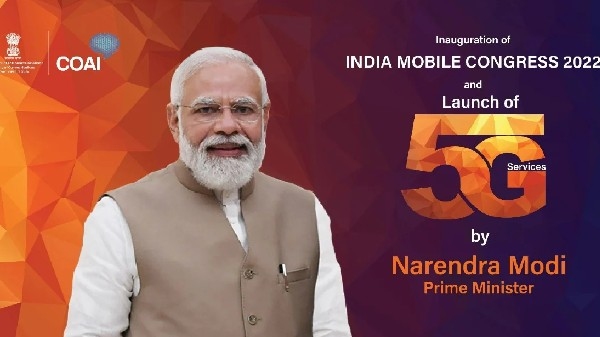 India Mobile Congress will be held in 2022

The official website of the India Mobile Congress (IMC) reveals that PM Modi will inaugurate the annual event, which is being jointly organized by the Department of Telecommunications, the Ministry of Communications and the Cellular Operators Association of India (COAI).

It gives us great pleasure to announce the inauguration of “India Mobile Congress 2022” by the Honorable Prime Minister of India, Shri Narendra Modi. IMC said while writing this in a tweet from its official Twitter handle.

Recently, Minister of State (MoS) for Communications Devusinh Chouhan has said that India will get nationwide 5G coverage in a few years. The MoS made these remarks while holding bilateral talks with Russian Deputy Minister of Digital Development, Communications and Mass Media Bella Cherkesova on the sidelines of the International Telecommunication Union (ITU) Plenary Conference 2022 in Bucharest, Romania.

During the bilateral talks, the Minister of State for Communications said that the Government of India has constituted a Technology Group to design and develop 6G technology by 2030. He said that there are many areas where Russia and India can collaborate which include developing 5G use cases, designing 6G technology, IoT, M2M, developing cyber security.

Reliance Industries (RIL) Chairman Mukesh Ambani said that Reliance Jio is planning to roll out Jio 5G in several major cities by this Diwali 2022. “We plan to increase Jio 5G month by month. By December 2023, which is less than 18 months from today, we will be delivering Jio 5G to every city, every taluka and every tehsil of our country.

Meanwhile, Bharti Airtel Ltd is all set to launch its 5G services and will cover urban India by the end of 2023, Gopal Vittal, chief executive of the second largest telecom operator, said earlier this month. After that, we will expand rapidly across the country.

Like 3G and 4G, telcos will also announce dedicated 5G tariff plans soon and according to industry experts, consumers can pay more to use 5G services on their devices.

According to an Ericsson report, over 100 million users with 5G-ready smartphones in India are looking to upgrade to a 5G subscription in 2023, while more than half of them are set to upgrade to a higher data tier plan in the next 12 months. Huh. Indian smartphone users in urban centers are waiting to upgrade to 5G as it starts rolling out next month.