IDC experts named the leader in the growing PC market 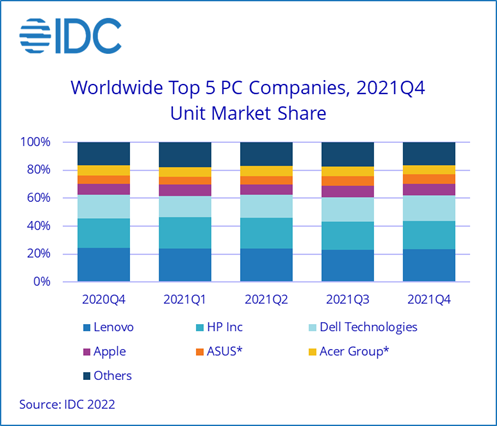 Analyst firm IDC has published a report for the fourth quarter of 2021 and for the entire 2021 in the “traditional PC” market. Analysts estimate that 92.7 million computing systems were sold in the fourth quarter in this category, which includes desktop PCs, laptops and workstations. The given value corresponds to an increase in annual terms of 1%.

At the end of the quarter, Lenovo, HP, Dell and Apple took the first four places in the ranking of manufacturers. Their shares are 23.4%, 20.1%, 18.6% and 8.2% respectively. Shares of Asus and Acer Group are equal to 6.6% and 6.5% respectively. For such a small difference, IDC cannot guarantee that it is greater than the error in the calculations, so these companies are tied for fifth place.

If we talk about the results of the year, the situation there is more unambiguous. The share of Acer Group is 6.9%, which corresponds to the fifth place. Fourth with 8.0% is Apple. Third place is occupied by Dell with 17.0%. Second place belongs to HP, whose share is 21.2%. And Lenovo is called the market leader in IDC. The Chinese manufacturer in 2021 provided 23.5% of the supply of all finished PCs in the world. It is noteworthy that all the top five companies were able to increase supplies compared to 2020. The leader in this indicator is Apple, which increased shipments by 22.1%.