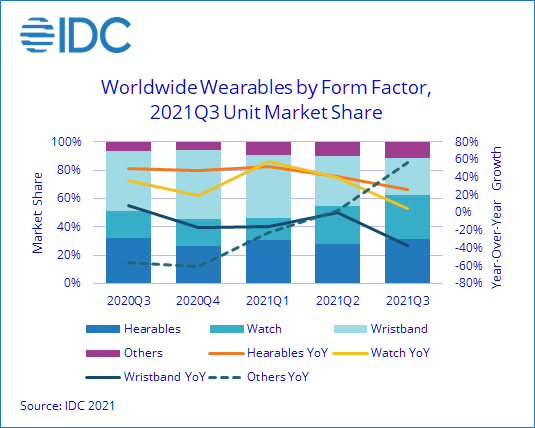 Specialists of the analytical company IDC have prepared a report for the third quarter of 2021 related to the market of wearable electronic devices. According to their calculations, shipments of these devices in annual terms increased by 9.9%. In absolute terms, they reached 138.4 million units.

Analysts point out that the largest growth was recorded in the headphone segment. It amounted to 26.5%. Moreover, this segment continues to be the largest. At the end of the quarter, it accounted for 64.7% of all shipments of wearable devices. The second largest segment is the wrist-worn segment. It accounts for 34.7% of the market.

Apple remained the market leader in the third quarter, although shipments of Apple Watch devices declined by 35.3% in just the quarter. Headphones helped to partially compensate for the decline, but in annual terms, Apple’s share has noticeably decreased – 32.8% to 28.8%. The second place is occupied by Samsung, whose share increased from 8.9% to 9.2% over the year. The third place is taken by Xiaomi. At the end of the quarter, it also takes 9.2%, but a year ago the share of the Chinese manufacturer was 13.2%. Next comes Huawei. The share of this company decreased over the year from 8.4% to 7.9%. And the top five is closed by Imagine Marketing, whose share has grown from 2.6% to 7.2%.