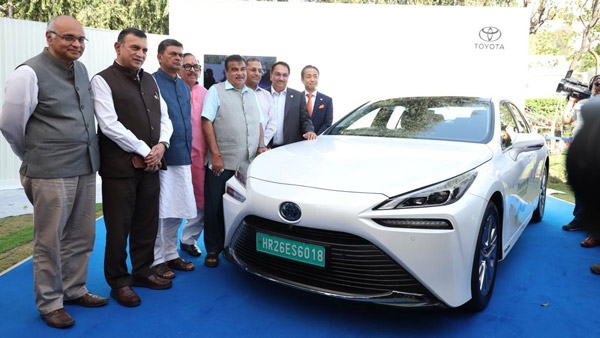 During the launch, Toyota said that the next generation model of the Mirai Hydrogen car will be completely made in India. It will be manufactured at Toyota Kirloskar Motors’ plant in Karnataka. Let us know that the concept model of Toyota Mirai was introduced in the year 2020. Powered by the clean fuel Toyota Mirai comes with a host of modern features and amenities.

According to the information, the hydrogen tank of Toyota Mirai can be completely filled in just 5 minutes. It can run for 646 km on full tank hydrogen. Like electric vehicles, the hydrogen-powered Toyota Mirai produces zero emissions.

The Toyota Mirai sedan comes with a high pressure hydrogen fuel tank. The engine of this car converts the energy generated by the reaction of hydrogen and oxygen into electricity, which gives energy to the electric motor in the car. This reaction generates water vapor that escapes through the exhaust pipe of the car.

According to the Ministry of Road Transport and Highways, transportation powered by green hydrogen is going to be an important technology option of the future, especially as it is best suited for cars, buses, trucks, ships and trains and medium to long distance vehicles. is applicable.

Nitin Gadkari said that this is the first project of its kind to spread awareness about hydrogen and clean fuel vehicles in the country. He said that he will soon buy a Toyota Mirai car for personal use.