How many people can sit in 1 car? These people answered this question 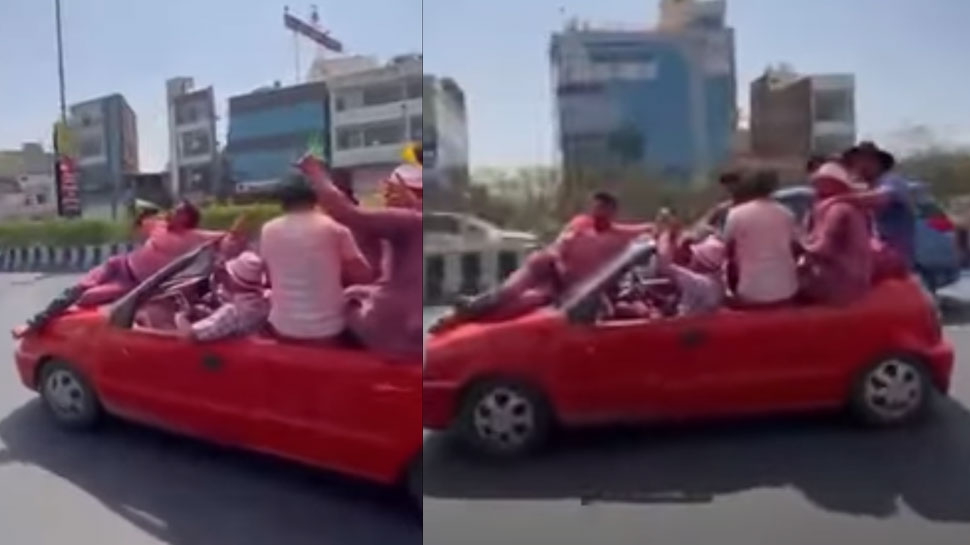 Two years after the epidemic, people have got a chance to celebrate Holi and people have fun on this Holi. But in Rajasthan, such an incident has been recorded in the video where 8 youths are seen riding in the same car and keeping all the road safety rules in mind.

New Delhi : On Holi, many people would be seen breaking the rules on the road, bikers are also seen in a drunken state while falling. But what we are telling you today is the incident of Rajasthan, here there were 8 people in a modified Maruti Suzuki Zen, out of which one person is seen lying on the bonnet of the car. Two years after the outbreak of Kovid-19, where people have got a chance to celebrate Holi, in Rajasthan, these people have been seen breaking almost every rule of road safety. This whole incident has been shot by a person on his mobile.

broke almost all the rules

The video of this incident has appeared on the YouTube channel named Sonu Pujari on HVK. In the video, a modified Zen with an open roof is seen which is a 5-seater car, people are sitting on its side, out of these 8 people, one person is seen lying on the bonnet of the car, drinking alcohol without any fear. Is. This incident seems to be from Jaipur, although till now no news of action has been received by the police. Here these people have broken many rules, including drunken driving, second dangerous driving and thirdly driving modified car on public road.

On the occasion of Holi, where the police system is increased, challans of thousands of people across the country have been deducted on this day. In Delhi alone, 2,400 people have been challaned. To keep the situation normal, special teams were deployed in many states, for example in Chandigarh, about 24 special teams were monitoring the roads. Challans of people are deducted daily for driving under the influence of alcohol, but on the day of Holi, they increase manifold. In Delhi, challans worth Rs 51 lakh were issued on the day of Holi, most of which were for drunk driving.