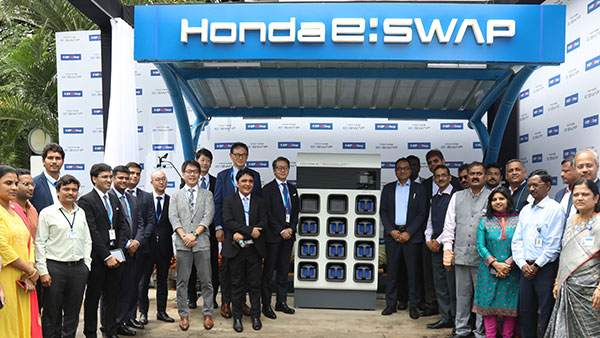 Honda says that with the introduction of this service, the initial price of electric three-wheelers will come down. Since the battery will be available to the electric rickshaw drivers at the swap station itself, they will not need to buy the rickshaw with the battery, making it economical to buy an electric rickshaw.

Honda is going to start this service in Bangalore initially. After the successful completion of this battery service model, it will be launched in other metros. Honda and Hindustan Petroleum had signed a Memorandum of Understanding and Commercial Agreement in February 2022. The two companies have entered into an agreement with a common objective to accelerate e-mobility in India, a press release said.

Honda has already installed its battery exchanger (Honda Power Pack Exchanger e:) at strategic locations among retail outlets of Hindustan Petroleum in Bengaluru and has started its operations for electric auto rickshaws.

Honda says the company wants to set up the largest battery swap network in India by 2023 with over 70 stations in Bengaluru alone. In addition, there is a strategy to expand the services to other major Indian cities based on the feedback.

Let us tell you that Honda has also recently started its first driving training center on the lines of Maruti Suzuki. Honda India Foundation, a subsidiary of Honda India, has opened this center in Karnal, Haryana, where training will be given to drive all types of vehicles.

Honda India Foundation’s first Institute of Driving Training and Research (IDTR) is spread over 9.25 acres of land. It will provide scientifically designed training courses that include theoretical, practical and simulator-based training. In addition, there will be special training programs for corporates and fleet owners.