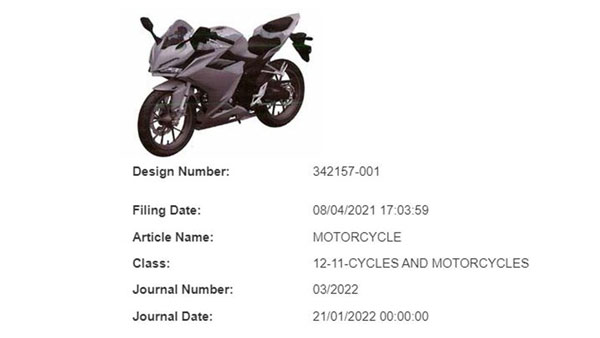 This is because the latest information is coming out that Honda Motorcycle India has once again registered the design patent of the new Honda CBR150R in India. This particular motorcycle has been present for sale in markets like Indonesia for some time now.

But what has interested us is that it has always been a rival to the popular Yamaha R15. Now once again soon it is going to compete with Yamaha R15 in the Indian market. The company is about to give a lot of styling updates to the new Honda CBR150R.

Coming to its new design, the new Honda CBR150R looks like a proper mini sport bike with a sharp fairing, sharp looking fuel tank and an upswept tail. Apart from this, its side fairing has also been neatly integrated.

This engine provides 17.1 bhp power and 14.4 newton meter maximum torque. On the other hand, if we look at the engine found in its biggest rival Yamaha R15 V4, it uses a 155cc, liquid-cooled engine, which provides power of 18.4 bhp and maximum torque of 14.2 Newton meter.

Talking about the chassis available in it, the new Honda CBR150R uses a diamond frame, which uses a USD focus and a monoshock suspension. It can be seen that both the motorcycles are closely matched on paper.

Yamaha Motorcycle is quite a popular and established motorcycle in India. Whether Honda Motorcycle India will follow the design registration of the Honda CBR150R in India, only time will tell. At present, no information has been revealed about its launch timeline.

Let us tell you that recently Honda Motorcycles has revealed the 2022 Honda CB500X and has given some but important updates in it. Honda has made changes to the front suspension by replacing the telescopic fork with a new, non-adjustable 41 mm, Showa SFF-BP USD fork.

It should play a part in improving response from the front end as well as being absorbent on rough roads with its 132mm of suspension travel. Honda has replaced the front wheel with a new aluminum unit, which is 100 grams lighter than the previous one.