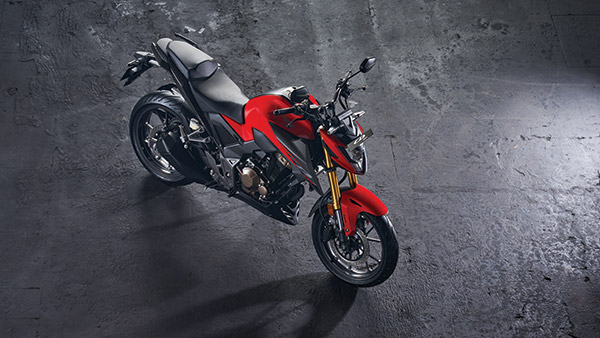 Honda CB300F is a naked bike from the company and looks very attractive. The company has given a 286 cc, single cylinder engine in CB300F which provides 24.13 bhp power and 25.6 Nm torque and it comes mated to a 6-speed gearbox. It has been given an aggressive design along with Honda Selectable Torque Control to ensure a smooth ride.

Talking about the features, the Honda CB300F has been given LED lights on all sides and a fully digital instrument cluster. It has been given the Honda RoadSync feature which performs multiple functions through Bluetooth connectivity. With the help of this technology, you can get calls, messages, music, navigation and weather information. It can be operated with a switch on the handle.

Talking about its look, the Honda CB300F has been given a muscular and toned tank, which gives a strong look to the bike. It gets a split seat with compact muffler and V-shaped alloy wheels. It gets USD forks for suspension at the front and 5-step adjustable mono shock suspension at the rear. It gets 150 mm wide radial tires at the rear.

Keeping in mind the convenience of the rider, this bike has been given engine start stop switch, key on the tank, USB-C phone charger. Honda CB300F is made available in three color options – Sports Red, Matte Axis Gray Metallic, Matte Marvel Blue Metallic. It gets a fuel tank of 14.1 liters and weighs 153 kg.

This bike has been kept 2084 mm long, 765 mm wide, 1075 mm high and wheelbase 1390 mm. With the Honda CB300F, the company offers a standard warranty of 3 years but this can also be extended. This bike of the company will compete with models like TVS Apache RR 310 in the Indian market but does not compete directly with any model.

After Honda CB300R, now CB300F has been brought to the Indian market. Considering the success of premium bikes, Honda has introduced a new model in this segment but whether it will create its own market or compete with the 350cc models, it will be interesting to see.