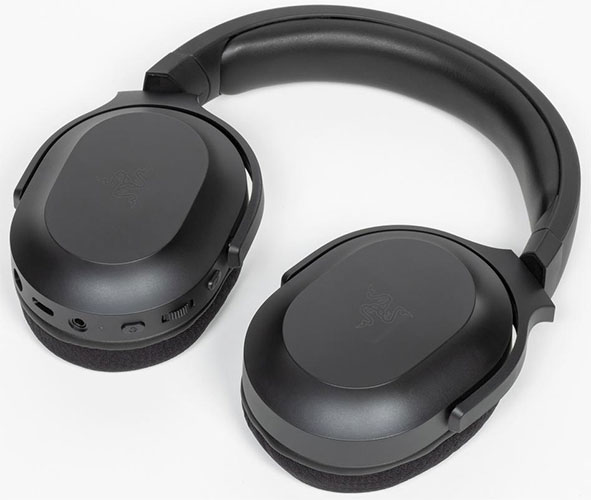 Wireless headphones that work through the receiver – Barracuda X became another attempt to make a model that is easy to use both at a personal computer and outside the home. But their main plus is not at all in versatility, but, unexpectedly, in sound.

I do not like to write about boxes, but this is a special case. Instead of the usual plastic holder, the headphones and accessories are packed in opaque plastic. It is thicker than ordinary plastic, soft to the touch, but is unlikely to protect the device during transportation in the same way as a familiar lodgement would.

The kit includes all the necessary cables: USB Type-C and USB Type-A for charging and connecting the receiver to a computer, as well as a cable with two mini-jacks for analog connection. In addition, the box contains a microphone with a windscreen and a receiver with a USB Type-C connector.

The Barracuda looks modest, especially compared to Razer’s usual acid-bright design. There are no lights here, only black matte plastic. Even the manufacturer’s logo on the cups is barely visible. However, on the manufacturer’s website, the same model can be found in white and pink colors.

Cups are not round, but elongated. And, it would seem, this is done so that they better cover the auricles. But due to the small size, the ears are still pressed against the ear pads. On the one hand, this makes the headphones comfortable to carry in a backpack, for example, and on the other hand, it seriously reduces the convenience. And although the ear pads are fabric, and inside there is memory foam, because of their size, it was uncomfortable to use these headphones for more than a couple of hours.

The cups rotate on the headband, and this gives a good bonus to the compactness of the device.

All connectors and controls are located on the left cup. There is a USB Type-C connector for charging, a mini-jack for analog connection, a volume wheel, a Power button, a microphone jack and a button that turns it on. There is also an LED indicator that shows whether the headphones are turned on and signals a low battery.

Headphones are connected using a receiver with a USB Type-C connector, which significantly expands the range of devices that can be connected to without an adapter: phones, tablets, Nintendo Switch, many laptops and even desktop computers have this connector. If there is no such connector on the PC, you can use the included extension adapter. The advantage of the receiver is that you do not need to reconnect the headphones, as when using Bluetooth: you plug it in and it all works. The downside is a whistle sticking out of a tablet or smartphone, with which you need to be extremely careful not to damage the port.

However, I carried the construction of the phone and the receiver in my pocket during the tests, listening to music, and nothing terrible happened, with the exception of frequent disconnections. Still, using Barracuda X as a headset is not the most rational idea. And the detachable microphone on the bending rod only confirms this.

The microphone on/off button sits loosely in the case. Simply put, it dangles, so that with some shaking, you can hear its knock on the cup. It is not very convenient that, except for the touch, by the position of the button, it is impossible to understand whether the microphone is on.

At the minimum volume in one of the positions of the wheel, the signal in the right emitter disappears. Most likely this is a factory defect specifically for our test model. In all other positions, everything is in order with the sound, there are no interruptions and interference.

The autonomy of the headset is high enough to charge it about once a week, even with prolonged everyday use. The manufacturer claims 20 hours of continuous operation on a single charge. Approximately the same with errors I measured during the tests. Moreover, the headphones are fully charged for an hour and a little. It is possible even with a discharged battery to connect the headphones via cable and not think about the charge.

The best thing about this model is the sound. Razer says it uses its own TriForce technology in order to better handle frequency bands. Many people think that this means the presence of additional emitters, but no. The Barracuda X has only two 40mm drivers. They use TriForce technology, namely, special holes in the diffuser, which, according to the manufacturer, make the tops cleaner, bass deeper and mids smoother. And the membrane is made of titanium, which seems to be good too.

Usually, such words cause me distrust, but here I was convinced from my own experience – apparently, 40 mm speakers in gaming headphones can produce a flat frequency response. With the exception of a jump in the upper middle, which absolutely does not affect the impression of the sound of this model, everything is balanced. Particularly surprising is the lack of protruding bass. Because of this, the music sounds clean and pleasant.

The microphone sounds the same as many microphones in gaming headsets, there are no special revelations or special complaints here. Cardioid directivity does not contribute much to passive noise cancellation, and active noise cancellation is absent in this model. However, the voice is clear. And the microphone also cuts off frequencies above 10 kHz, and this also does not let excess noise into the audio path.

Separately, it must be said about the volume of the sound of the Barracuda X, here it is on the border of the pain threshold, at least mine. At full volume, listening to music in these headphones is difficult, and if you remove them, you can use them as a small audio speaker, they are so loud. And this closes the issue of soundproofing, because with such a sound level it is simply not needed. I quite comfortably listened to music on the Moscow metro lines with the windows open in the car, and I hardly felt the noise of the train.

The Razer Barracuda X should be seen as a versatile model with a focus on home use. Still, the lack of Bluetooth and a detachable microphone make it impossible to comfortably wear them as a wireless headset for a smartphone. The headphones are lightweight, with soft ear cushions, impressive autonomy and, most importantly, balanced and loud sound. And it is the latter that strongly distinguishes the Barracuda X from the total mass of headphones “for gamers”. At the time of writing the review, the model cost about 8,000 rubles.