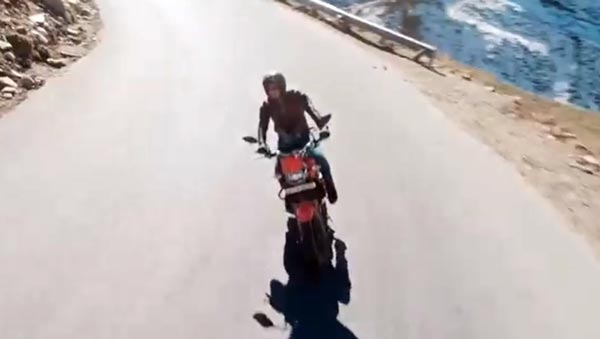 The upcoming Hero XPulse 200T 4V was recently spotted in India during a TVC shoot. The leaked images reveal that the motorcycle gets fork cover getters, a new visor over the headlamp, new paint scheme and much more. However, the biggest update for this touring motorcycle will be its engine.

The new Hero XPulse 200T 4V will be powered by a 199.6 cc, single-cylinder, oil-cooled, fuel-injected, 4-stroke, 4-valve engine. This motor will generate 18.9 Bhp and 17.35 Nm of peak torque, which is mated to a 5-speed manual gearbox. Talking about the features, the XPulse 200T 4V will get a Bluetooth-based digital instrument cluster with navigation, a USB charging port etc.

There will be no change in the hardware bits of the motorcycle. It will get telescopic front forks and mono-shock absorbers at the rear. For braking, the motorcycle will get single-channel ABS with disc brakes at both the ends. Hero XPulse 200T 4V price is Rs 1.24 Lakh, ex-showroom and expect the upcoming 4V model to be slightly more premium.

Hero MotoCorp has sold 4.54 lakh two wheelers in the month of October. The company has registered a growth of 20% over the previous year in the festive season of 32 days and thus has the lowest post-festival inventory in the last 5 years.