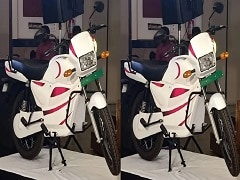 ADMS has launched its new electric motorcycle named Boxer at the third edition of Green Vehicle Expo held in Bengaluru. While piracy is clear from the name, ADMS Boxer has taken a lot from Hero Splendor. The rest of the bike is pretty much the same as the Splendor except for the hidden middle part that houses the battery.

At present, complete information about ADMS Boxer is not available. In terms of range, it has a claimed range of 140 km which will be available when the bike is used in eco mode. It has a lithium-ion battery that powers the hub mounted motor. The ADMS Boxer has 3 ride modes as well as a reverse mode. These types of features are now seen as standard on most electric two-wheelers.

ADMS Boxer Styling: Talking about the features which are almost like Splendor, they include rectangular headlamps, front cowl, front and rear mudguards, fuel tank, seat design and grab rail. Unless one sees this bike almost, it can easily be mistaken for a customized version of the Hero Splendor.

Even the suspension setup of the telescopic front forks and twin rear shock absorbers is quite similar to the Splendor. However, being an electric bike, the ADMS Boxer has some unique features. Like it gets different handlebar design and positioning, chrome-tipped grips and unique switch cube.

While the cockpit section and twin pod instrument console have a familiar design. Fuel gauge has been replaced with battery percentage indicator. The left pod has the same speedometer and mileometer as the Splendor. Even though the graphics inside the dial are different than those on the Splendor.

The mid-section of the ADMS Boxer is completely faired and there is no opening to remove the battery pack. The bike is expected to have a removable battery that can be accessed via the fuel tank along with the charging port. At present, complete information about this bike is not available.

ADMS EV Specifications: Most of the electric two-wheelers offered by ADMS have a range of 100-120 km. One of the bestsellers is the ADMS-TTX electric scooter with a rating of 1,500W. Users can choose from battery options of 60V/30AH and 72V/45AH. Charging takes 4-8 hours. The battery is covered by a 3-year warranty. Some of the specifications include center locking, anti-theft alarm and keyless entry. Mobile app connectivity is also optional. The scooter is ICAT and ARAI certified.

An option for motorcycle lovers can be the ADMS M3 which has a top speed of 70 kmph. The 72V, 45AH battery has been used in the bike, which takes about 5-6 hours to charge. ADMS M3 is certified by ICAT. The upcoming ADMS product includes an e-Bullet which will get a 72V, 90AH battery pack that will power the 3000/4000 W motor. Its top speed will be 120 kmph.