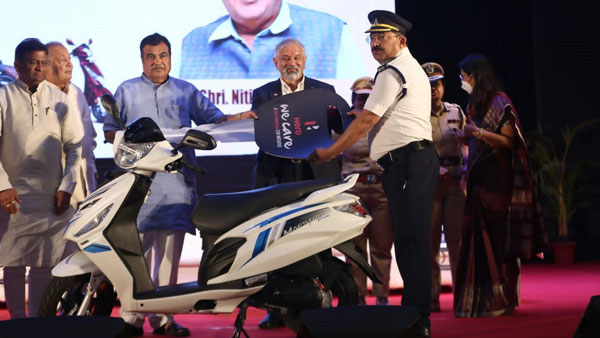 Let us tell you that these Hero scooters will enable the police officers and fire department officials to provide faster services during emergency situations. These will help in providing better security to the citizens of Nagpur and especially women.

Union Minister for Road Transport and Highways, Nitin Gadkari was also present on the occasion. Hero MotoCorp Executive Director, Vikram Kasbekar handed over the scooters to the Police Commissionerate and Fire Department in the presence of Nitin Gadkari.

Speaking on the occasion, Union Minister for Road Transport and Highways, Nitin Gadkari said that “We appreciate Hero MotoCorp for taking initiative and partnering with Nagpur Police and Fire Department on the occasion of International Women’s Day.”

Nitin Gadkari further said that “It is a classic example of corporate and local authority collaborating together to ensure the safety of citizens, especially women.” Talking about Hero MotoCorp, earlier this month itself, the company released its sales figures.

According to the data released by Hero MotoCorp, the company has sold 3,58,254 units of vehicles last month. In the same period last year, the company had sold 5,05,467 units, which has led to a decline in the company’s sales this year.