‘Hero’ initiative: For the safety of women, this company gifted 50 bikes and 10 scooters to the police 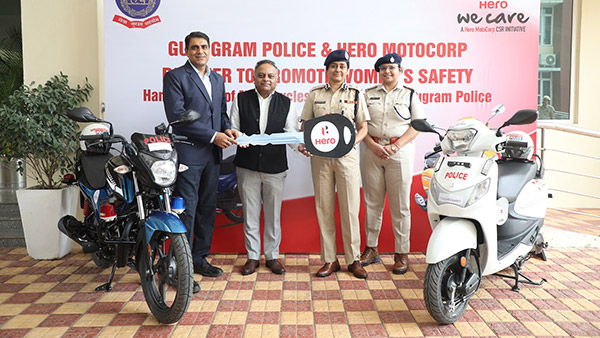 On this occasion, Kala Ramachandran (IPS), Commissioner of Police, Gurugram, said, “We company are grateful to Hero MotoCorp for this collaboration, which will improve our officers’ access to crime. Police can use it to patrol their jurisdictions. This will go a long way in increasing the safety of people, especially women.

Hero MotoCorp has sold 4.54 lakh two wheelers in the month of October and the sales cannot be compared with last October as the last festive season was in both the months of October and November. The company has registered a growth of 20% over the previous year in the festive season of 32 days and thus has the lowest post-festival inventory in the last 5 years.

The company has sold 454,582 units of vehicles in the month of October, which is less than last year’s 547,970 units. The company had started the Grand Indian Festival of Trust during the festive season under which customers got various discounts. Booking of new vehicles, offers on purchase, finance schemes etc. were also made available.

The company launched the first electric scooter last month. Hero Vida electric scooter has been brought in two variants – V1 Pro and V1 Plus. The price of Vida V1 Pro has been fixed at Rs 1.59 lakh and the price of V1 Plus has been fixed at Rs 1.45 lakh. All prices are applicable on ex-showroom basis. The company has introduced both the scooters with a portable battery, that is, the battery can be charged by taking it out of the scooter.

According to Hero, on a single full charge, the Vida V1 Pro will offer a range of 165 kms, while the Vida V1 Plus will offer a range of 143 kms. The company is also providing the option of fast charging with both the scooters. The company claims that both the scooters can be charged with a fast charger to run up to 1.2 kilometers on a charge of just one minute.