Helicopter can now land on the world’s longest car, once again on the road 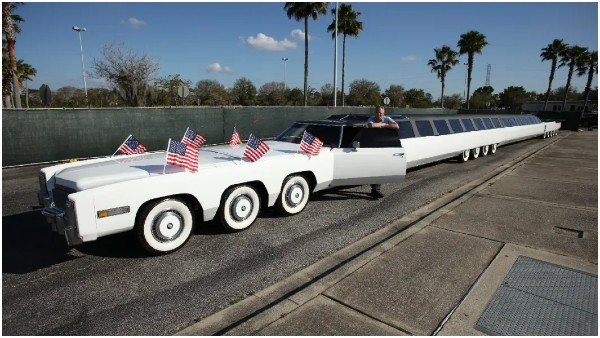 For perspective a regular car is on average 12 to 16 feet long. According to Guinness World Records, the car was originally built in 1986 by car customizer Jay Ohrberg in Burbank, California. At that time this car used to come with a length of 60 feet.

Apart from this, 26 wheels were used in this car and a pair of V8 engines were installed at the front and rear. After some customization, the length of this car has now been increased to 30.5 meters. In such a situation, The American Dream has become even longer.

It is made in two sections and is joined by a hinge in the middle for turning tight corners. But the long size of the car means that it provides passengers in the lap of luxury. It has a large water bed, a swimming pool with a diving board, Jacuzzi, bathtub, mini-golf course.

Not only this, a helipad has also been given in this car. Michael Manning, involved in the restoration of The American Dream, told Guinness World Records that “the helipad is structurally mounted on a vehicle with a steel bracket at the bottom and can withstand loads of up to five thousand pounds.”

Apart from this, a refrigerator, a telephone and several television sets have also been installed in this car. According to Guinness World Records, more than 75 people can ride in this car. During its prime, “The American Dream” appeared in several films and was frequently hired.

But due to its high maintenance cost and parking issues, people lost interest in the car and it got rusty. Then Manning decided to restore the car and bought it off eBay. According to Guinness World Records, the restoration cost $250,000 in shipping, materials and labor and took three years to complete.