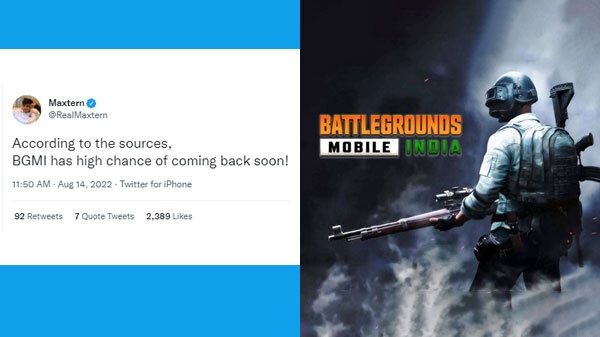 From Google Play Store and App Store BGMI It’s been more than two weeks since it was suddenly removed. Several influential people are suggesting that fans stay optimistic and wait for the game to return.

The new spotlight is from Maxturn as they claimed that BGMI has a high probability of coming back soon! However, the tweet done can be taken individually on the whole plan. We expect clarity on the BGMI situation in the coming weeks.

For those unaware, Maxturn is one of the famous YouTubers and influencers in the Indian gaming community. The government hasn’t issued an official announcement on the game’s ban or removal from virtual storefronts, but multiple media reports suggest.

According to the sources,
BGMI has high chance of coming back soon!

Team GodLike’s content creator Maxturn tweeted that according to sources close to him, BGMI is likely to be back soon. BGMI was removed from the App Store on 28 July 2022 without any prior notice. But, a Google spokesperson said that they have removed the app following the government’s order and they have informed the developer before taking action. Initially, Crafton’s statement mentioned that they were complying with all regulations and complying with all Indian laws and promised to continue to comply as required.

The content creators have assured the return of the game but have not given any specific date. SkySports CEO, Shiva Nandi said that BGMI’s ban is temporary and will return 100% as TikTok reportedly prepares to make a comeback in the country.

Siva also mentioned that the suspension of BGMI had been going on for 5 months and was not a smooth move. According to his statement, an interim order was sent to Crafton before the government took steps to remove the game. Fans will have to wait a few more days and remain optimistic about the arrival of the game.