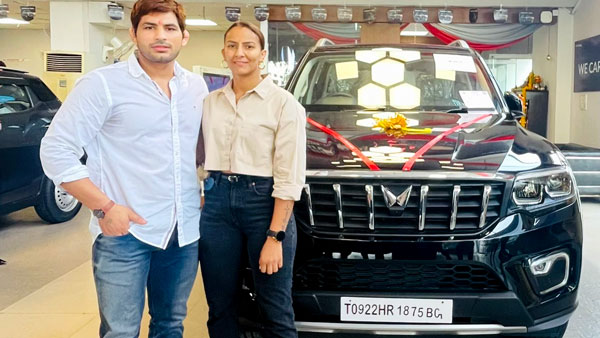 Geeta Phogat is an Indian female wrestler who won a gold medal in the Commonwealth Games. Sharing the photo on Twitter, he wrote that ‘Welcoming the new member on the first day of Navratri’. He also thanked Anand Mahindra.

In response, Anand Mahindra tweeted, “It is our privilege to have Geeta Mahindra as one of the first customers of Scorpio-N. We are getting the benefit of your gold medal glory. We look forward to seeing our car. Will prove to be strong just like you!”

Mahindra is targeting to deliver 20,000 units of the Scorpio-N by December this year. Mahindra will initially deliver most of the top-end Z8 L variants. The company had made a record by booking 25,000 Scorpio-N in just one minute on the first day.

Mahindra Scorpio-N price starts from Rs 11.99 Lakh and goes up to Rs 23.90 Lakh (ex-showroom). Mahindra Scorpio-N has been developed at Mahindra’s Research Valley in Chennai. The new Scorpio-N is being sold alongside the existing Scorpio. The new SUV gets a modern design and is bigger than the current model.

The new Scorpio-N gets 6 airbags as well as voice command and cruise control. It gets features like LED projector headlight with dynamic LED turn indicators, C-shaped daytime running LED and LED fog lights on the front bumper.

Scorpio-N is available in five variants

The company launched this new version of the Scorpio N SUV in the market on June 27. It was offered in five variants Z2, Z4, Z6, Z8, Z8L. The Scorpio-N has been launched in diesel and petrol engines. It is available in both the engines with manual and automatic transmission. At the same time, the four wheel drive feature is available only with the diesel engine options of Z4, Z8, Z8L.

Petrol and diesel engine options are available in the Scorpio-N. Its 2.0 turbo petrol engine produces 200 Bhp of power along with 270 Nm of torque. At the same time, the 2.2-litre turbo diesel engine is available in two state options. Its lower version gives power of 132 bhp and torque of 300 Newton meter. Whereas its higher version generates 175 bhp and 370 Newton meter torque. It has the option of 6-speed manual and 6-speed automatic.

Mahindra top-variant Scorpio N Z8L is in high demand. The company is trying to deliver it first. The waiting period for the Scorpio-N is currently around 22 months for both the petrol and diesel variants. Suppose if you book the Scorpio-N today, you may get it by 2024.