Gasoline-powered bike flying in the air 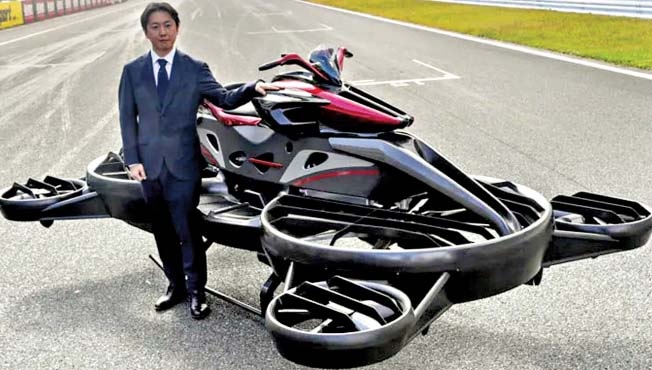 Japan’s LLI Technology has developed an airborne bike called ‘X Tourismo’. Although the bike is currently running on petrol, the company plans to launch an electric version by 2025. In the future, cities like Tokyo, Japan will have problems like traffic, pollution. At that time, the company thinks that eco-friendly bikes like ‘X Tourismmo’ would be a great option.

Some games in childhood are even right. It is very curious for us to make paper boats by gathering the people around us, to fill their competition with toy cars, to make airplanes and fly them in the air, to have fun. The most interesting thing is to drive a remote car. Bicycle, car, bike competitions on the sports channel on TV are a subject of curiosity for us. The cars, the sound of the bikes, the tussle between the competitors, the occasional cars crossing the hurdles of the competition, the increasing speed of the bike, all these are heart-pounding moments.

What if the cars or bikes on the TV are all around you every day and they are still flying in the air? How heavy would it be? It will no longer be just a dream come true. Because a Japanese company has brought a bike that flies directly in the air.

LLI Technology is a Japanese drone manufacturer. This company has made a bike that flies in the air. Its name is ‘X Tourism Limited Edition’.

Currently, this bike runs on petrol; But by 2025, the company wants to bring its electric version to market. According to the Reuters news agency, the bike weighs 300 kg. It is 3.7 meters long, 2.4 meters wide and 1.5 meters high. The bikes are priced at Rs 5.10 crore and so far only 200 bikes have been launched by the company.

This bike is not allowed to fly on the roads of Japan. Therefore, at least for now, it will not be seen flying on the roads, explained the company’s CEO Desuke Katano. So we’ll have to wait a while for that; however, it is possible to use this bike during rescue operations during emergencies.

Daily vehicles have caused a lot of pollution as well as increased dependence on petrol and diesel. It is affecting the overall environment. Due to the increase in traffic, the traffic on the roads is increasing. Therefore, we have to think of the future and build an alternative model. “We are looking at this as a part of it,” Katano said.

Earlier in 2018, the American company Hoversurf Inc. had built a flying bike called ‘Scorpion 3 Hover’. It weighed 115 kg and was priced at Rs 39 lakh. It had 3 batteries. It was said that it would take 3 hours to charge her; But nothing further happened.

You may have heard of the toy remote car; But in June of that year, an electric car flew over Australia. It was launched by automaker Matthew Pearson. This car that can fly in the air using a remote is specially designed for racing. A similar vehicle was tested by a company called Aircraft in August 2020. The US military was called in to help. A two-seater car, the Air Car V5, was similarly tested. It had a successful landing and takeoff.