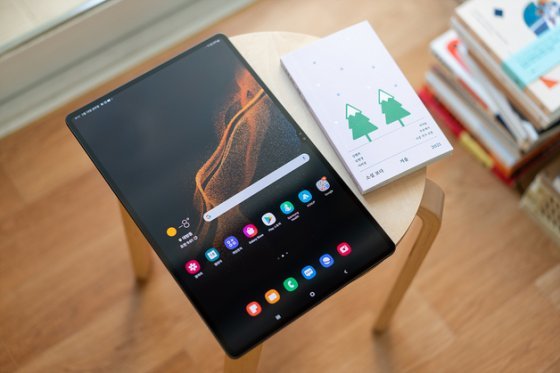 big and beautiful It is a suitable modifier for ‘Galaxy Tab S8 Ultra’. Samsung Electronics’ latest tablet PC is back with a 14.6-inch large screen. Compared to the previous Galaxy Tab series as well as the iPad series, it appears to have a competitive edge in tablet products through the unprecedented screen size.

Tablet PCs have been pioneering the market based on ‘big screens’ in the middle ground between smartphones and laptops. However, as the competition between smartphones continued, the position of tablets became fuzzy. In particular, the advent of foldable phones brought a crisis of existence of tablets. Accordingly, manufacturers are continuing the vitality of the tablet category by giving a new value as a ‘productivity tool’. At this time, the overwhelming screen gap can be a clear competitive edge for tablets.

However, there is a limit to increasing the product screen. Because the bigger the screen, the more portability you have to sacrifice. Portability and tight tightrope walking are mostly confined to the 12-inch range. The Galaxy Tab S8 Ultra is the result of Samsung challenging this screen size limit. This is in contrast to the iPad Pro’s focus on increasing portability by cutting the bezel instead of increasing the screen size. 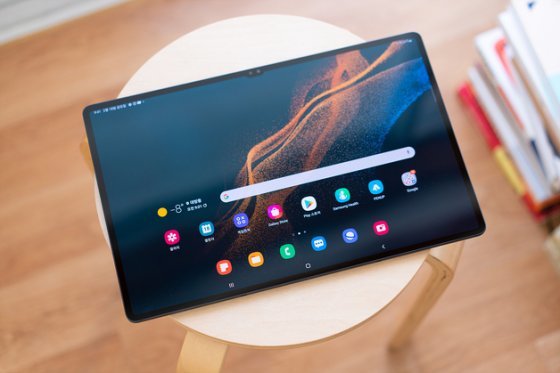 The announcement was pretty plausible, but I had big doubts about the product size balance. Until you actually get your hands on the product. Large screen and portability If you try to catch two rabbits and do not strike a balance between the two, the tablet PC becomes nothing and nothing. The previous ‘Galaxy Tab S7’ series provided a maximum 12.4-inch screen. Apple’s iPad Pro series offers sizes up to 12.9 inches. The screen size of 14.6-inch, which is about 2 inches larger than this, seemed close to the experimental work. The shape as if the top of the laptop had been removed seemed to instill confidence in these doubts.

However, the Galaxy Tab S8 Ultra in my hand broke expectations. It was lighter and stronger than expected. It weighs 728g (726g for Wi-Fi model). It is similar to the old 12.9-inch iPad (723g based on cellular model) when the home button remained. The exquisite balance of large screen and portability is the result of extremely reducing the screen bezel and thickness of the product. The bezel has been reduced to 6.3mm, the thinnest among the Galaxy Tab S series. Product thickness is 5.5mm. Compared to the latest iPad Pro 12.9-inch model, which is 6.4mm thick, it is extremely thin.

Thin thickness can lead to durability problems. In the case of the iPad Pro series, the product has been caught up in the so-called ‘band gate’. Samsung solved this problem through materials. ‘Armor aluminum’ is applied to increase durability compared to its predecessor. According to Samsung Electronics, the Galaxy Tab S8 Ultra is 40% less warped than its predecessor.

Multitasking using a large screen is the biggest advantage of the Galaxy Tab S8 Ultra. The iPad series has also strengthened support for productivity tasks such as screen division function by refining the closed operating system (OS), but it is insufficient compared to the Android OS. On the iPad, it is only possible to open a total of three apps at the same time, including the ‘floating window’, which is a floating window on the two-split screen.

On the other hand, the Galaxy Tab S8 Ultra divides the screen into three and can run three apps at the same time, and apps can be displayed one after another in a floating manner. If you use ‘DeX’, which provides a PC-like environment, you can run up to 20 apps at the same time.

The S Pen, which provides about twice the response speed compared to its predecessor, adds to productivity. It supports 4096 levels of pen pressure and tilt recognition to provide a sophisticated writing experience. With the multitasking function, it is possible to take notes while watching a video.

The problem is that there are no apps that can take advantage of such a large screen. For the iPad, it has a variety of professional productivity apps, including video editing and graphics tools. From 2019 to Adobe Photoshop, it is further emphasizing ‘pro’ productivity. Apple’s overconfidence in calling the iPad the next-generation computer comes from the backing of a robust app ecosystem.

On the other hand, it is not easy to find an app that provides an iPad-like experience on the Galaxy Tab S8 Ultra. There’s a Photoshop Sketch app, but it’s only half the price of an iPad app. Most productivity apps don’t match the app experience on the iPad. Samsung is also conscious of this fact and is strengthening the competitiveness of its own apps, such as the Note app, and increasing external cooperation with Microsoft, but it seems that there is still a long way to go to fill the insufficient app ecosystem. The fact that the collaboration with the video editing app ‘Lumafusion’ was announced at this Galaxy Unpacked event gives hope. 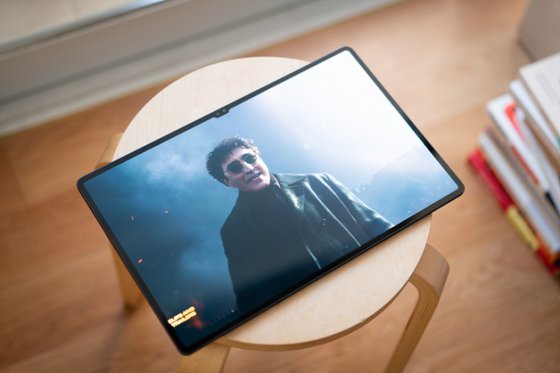 It was big and beautiful, but it was empty. This is a one-line review of the Galaxy Tab S8 Ultra. The key to Samsung’s tablet products is to bridge the gap between big and beautiful hardware and poor software. If this part is not resolved, it is difficult to give more than an ambivalent experience between a smartphone and a PC. It will remain as a ‘YouTube, Netflix machine in every corner’. This is the remaining task for Samsung to pursue innovation of experience.