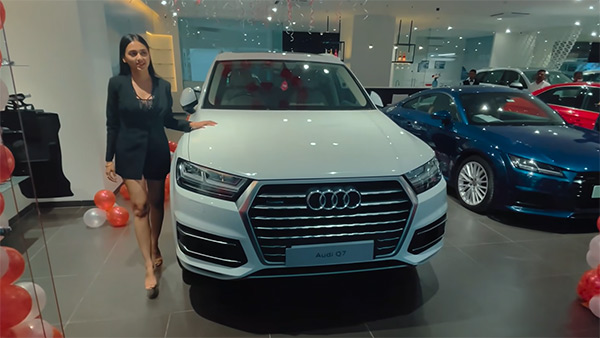 Aarti Singh, who was a Bigg Boss contestant, owns a Mahindra Thar which costs Rs 14.16 lakh. The latest variant of Mahindra Thar comes with multiple engine-gearbox combinations and a feature-loaded interior. Mahindra Thar is powered by 2.0-litre turbo-petrol and 2.2-litre diesel engine options.

For transmission, Mahindra Thar has been given the option of 6-speed manual and 6-speed automatic gearbox. The SUV comes with a 4×4 drivetrain, mechanical-locking rear differential, low-range transfer case, automatic climate control, cruise control, semi-digital instrument cluster and touchscreen infotainment unit. Aarti Singh has been the fourth runner up of ‘Bigg Boss 13’. She has also appeared in TV shows like ‘Thoda Hai Bas Thoda Ki Zaroor Hai’, ‘Parichay’ and ‘Waaris’.

Small screen actress Ashnoor Kaur is the owner of BMW X3. The price of this car is between Rs 61.90 lakh to Rs 67.90 lakh. The luxury sedan is powered by a 2.0-litre, four-cylinder, turbocharged petrol that churns out 252 bhp and 350 Nm of torque. It comes with an eight-speed automatic transmission.

The BMW X3 gets features like anti-lock braking system, multi-function steering wheel, six airbags and an engine immobilizer. The five-seater also gets alloy wheels. Ashnoor Kaur has appeared in TV shows like ‘Yeh Rishta Kya Kehlata Hai’ and ‘Jhansi Ki Rani’. She has also been a part of Bollywood movies like ‘Sanju’ and ‘Manmarziyaan’.

Karan Kundrra is known for TV shows like ‘Kitni Mohabbat Hai’, ‘Dil Hi To Hai’ and ‘Lock Up’. Along with the Jeep Wrangler Rubicon, his collection also includes a Range Rover, a Ford Endeavor and a Mini Cooper.

TV celebrity Rakesh Bapat bought a new Audi Q7 in February 2022. The price of this SUV is between Rs 82.49 lakh to Rs 90 lakh. This SUV comes in two variants – Premium Plus and Technology. The seven-seater luxury car comes with features like a four-zone climate control system, matrix LED headlamps, a sunroof and 19-inch alloy wheels. ‘Saat Phere: Saloni Ka Journey’ to Rakesh Bapat, ‘Maryada: But for how long?’ And known for TV shows like ‘Qubool Hai’.

Rupali Ganguly is currently playing the lead role in the popular TV show ‘Anupama’. She is said to be the most famous female actor in Indian television. The veteran actress has been a part of TV shows like “Sanjeevani”, “Sarabhai Vs Sarabhai”, “Baa Bahu Aur Baby”, “Parvarish – Kuch Khatti Kuch Meethi”.

Bigg Boss winner Tejashwi Prakash has added an Audi Q7 to his garage. Its price is between Rs 82.49 lakh to Rs 90 lakh. The Audi Q7 luxury SUV gets features like a four-zone climate control system, matrix LED headlamps, a sunroof and 19-inch alloy wheels. This seven-seater luxury car comes in two variants – Premium Plus and Technology. Tejashwi Prakash is the winner of Bigg Boss 15. She has also appeared in shows like ‘Swaragini-Jodi Rishton Ke Sur’ and ‘Fear Factor: Khatron Ke Khiladi 10’.

Urfi Javed remains in the headlines due to her bold photoshoot. They have recently added a new Jeep Compass to their car collection. Its price is between Rs 18.04 lakh to Rs 29.59 lakh. The Jeep Compass SUV comes with features like a 10.1-inch touchscreen infotainment system, a panoramic sunroof, cruise control, LED daytime running lamps and alloy wheels.