For first time, India votes against Russia in UNSC during procedural vote on Ukraine 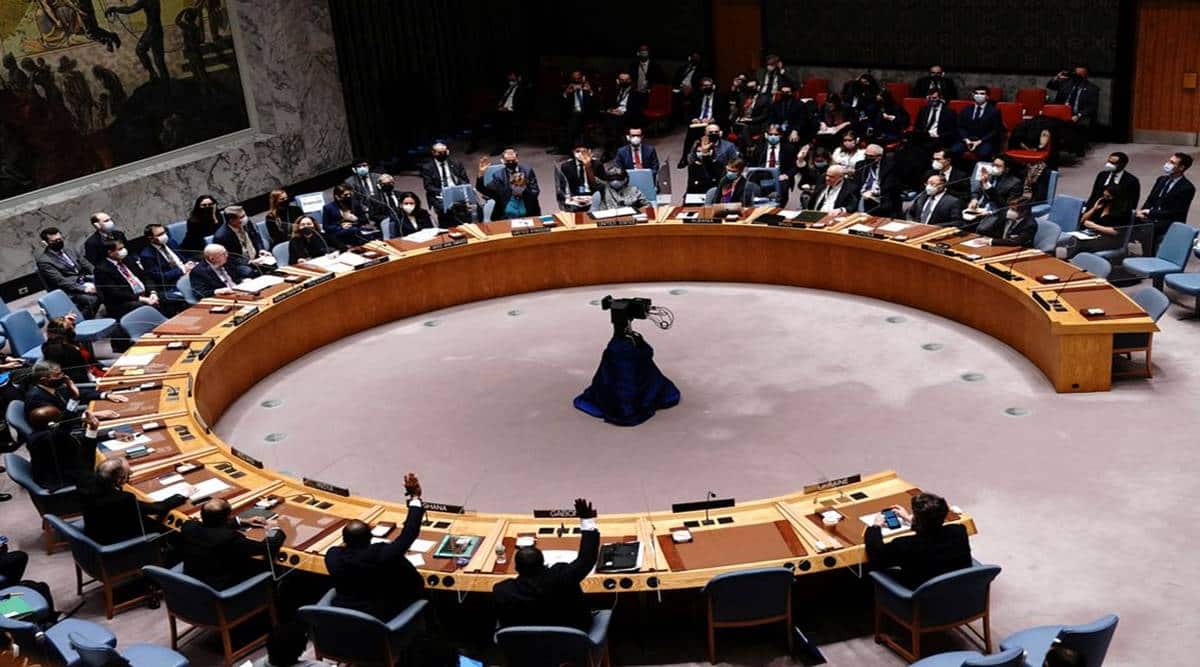 This is for the first time that India has voted against Russia on the issue of Ukraine, after the Russian military action began in February.

India for the first time on Wednesday voted against Russia during a “procedural vote” at the United Nations Security Council on Ukraine, as the 15-member powerful UN body invited Ukrainian President Volodymyr Zelenskyy to address a meeting through a video tele-conference. This is for the first time that India has voted against Russia on the issue of Ukraine, after the Russian military action began in February. So far, New Delhi has abstained at the UN Security Council on Ukraine, much to the annoyance of the Western powers led by the United States.

Western nations, including the US, have imposed major economic and other sanctions on Russia following the aggression. India has not criticised Russia for its aggression against Ukraine. New Delhi has repeatedly called upon the Russian and Ukrainian sides to return to the path of diplomacy and dialogue, and also expressed its support for all diplomatic efforts to end the conflict between the two countries.

India currently is a non-permanent member of the UNSC for a two-year term, which ends in December. On Wednesday, the UNSC held a meeting to take stock of the now six-month-old conflict on the 31st anniversary of Ukraine’s independence. As the meeting began, Russian Ambassador to the United Nations Vassily A Nebenzia requested a procedural vote concerning Ukrainian President’s participation in the meeting by video tele-conference.

Following statements by him and Ferit Hoxha of Albania, the Council extended an invitation to Zelensky to participate in the meeting via video tele-conference by a vote of 13 in favour to one against. Russia voted against such an invitation, while China abstained.Nebenzia insisted that Russia does not oppose Zelensky’s participation, but such participation must be in-person. During the COVID-19 pandemic, the Council decided to work virtually, but such meetings were informal and, after the pandemic’s peak, the Council returned to the provisional rules of procedure, he argued.

Reiterating that his country’s objection pertains specifically to the President’s participation by video tele-conference, he called for a procedural vote on this matter, to which India and 12 other countries did not agree and supported Zelensky to address the Council via video conference. Albania’s Hoxha argued that Ukraine is at war, and the situation in that country requires the President to be there. Due to this unique situation, he supported Zelensky’s participation via video tele-conference and urged other members to do the same.

Nebenzia regretted that Council members had spoken out against complying with the rules of the organ. “We can understand the logic of Kyiv’s Western backers…,” he said, expressing disappointment that other members contributed to the erosion of the Council’s very foundation and practices.Soon thereafter, Zelensky in his remarks via a video conference called for the Russian Federation to be held accountable for its crimes of aggression against Ukraine. “If Moscow is not stopped now, then all these Russian murderers will inevitably end up in other countries,” he said.

“It is on the territory of Ukraine that the world’s future will be decided,” he added. “Our independence is your security,” he told the UNSC.Zelensky alleged that Russia has placed the world on the brink of nuclear catastrophe by turning the Zaporizhzhia nuclear power plant into a war zone. The plant has six reactors — only one exploded at Chernobyl — and the International Atomic Energy Agency (IAEA) must take permanent control of the situation as soon as possible, he said.

The Ukrainian President called on Russia to cease its “nuclear blackmail” and completely withdraw from the plant. UN Secretary General Antonio Guterres expressed grave concern over the situation in and around the Zaporizhzhia nuclear power plant, underscoring that “the warning lights are flashing”. Any actions that might endanger the physical integrity, safety or security of the plant are unacceptable, and any further escalation of the situation could lead to self-destruction, he said and called for the security of the plant to be ensured, for the facility to be re-established as purely civilian infrastructure and for the IAEA to conduct a mission to the site as soon as possible.

Guterres also expressed concern over alleged violations of international humanitarian law.US Ambassador to the UN, Linda Thomas Greenfield alleged that “Russia’s goal is as clear as ever: to dismantle Ukraine as a geopolitical entity and erase it from the world map.

“Its disinformation campaigns are increasingly being weaponised to prepare for further attempts to annex Ukrainian territory,” she said.However, the international community will never recognise Russia’s attempt to change Ukraine’s borders by force, she told the UN Security Council.

Noting that Ukraine had an impeccable record of nuclear energy safety and security at the Zaporizhzhia nuclear power plant, she said the Russian Federation recklessly attacked and seized control of that site by force, risking nuclear disaster.The American envoy voiced concern about Moscow’s “so-called filtration operation”, which involves the systematic and forced deportation of Ukrainian civilians to remote areas of the Russian Federation.

Envoys from France, Ireland, Norway, United Kingdom, Gabon, Ghana, Mexico and China, along with the European Union in its capacity as observers also spoke on the occasion. Ukraine celebrated its Independence Day on Wednesday, which also marked exactly six months since the start of Russia’s military offensive against the country on February 24. News Source – PTI/financialexpress.com