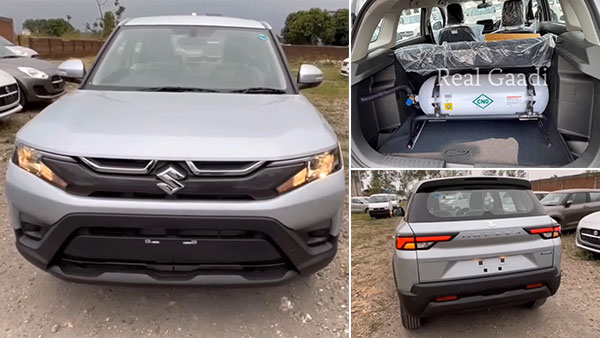 After launching the CNG-models of the Baleno and XL6, Maruti Suzuki may now launch the CNG model of the Brezza compact SUV.

The exterior looks similar to the regular version of the Brezza, with a sleek grille with chrome, dual L-shaped day LEDs, fog lights, heavy black cladding at the front and rear which gives it a muscular look. There is an additional nozzle for filling CNG next to the nozzle for petrol.

Although the interior shots of the Brezza CNG have not been shown in the video, it is expected that the interiors will be similar to the petrol version. However, the instrument console can be modified with an additional gauge for the CNG level. The new Maruti Suzuki Brezza CNG is expected to get features like free-mounted touchscreen infotainment system, wireless charger, heads-up display and sunroof.

The new Maruti Suzuki Brezza CNG will be offered in four variants – LXi, VXi, ZXi and ZXi+, which is the same as its petrol variant. All these variants will come with a 5-speed manual gearbox as standard.

The Maruti Suzuki Brezza CNG will be offered with the same 1.5-litre four-cylinder aspirated petrol engine from the Ertiga CNG. Along with the CNG kit, the engine here produces 88 PS of maximum power and 121.5 Nm of maximum torque.

Currently, there is no other compact SUV that will be available with a factory-fitted CNG kit. Considering the popularity of CNG powered vehicles, Maruti Suzuki Brezza CNG may benefit from being the first choice in the market.