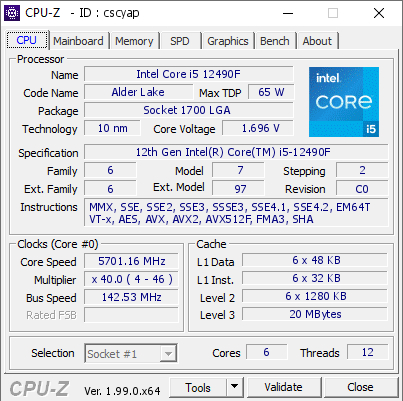 We have repeatedly written that “non-overclockable” Intel Alder Lake processors can be overclocked – for this you need to get an appropriate motherboard based on the Z690 or B660 chipset. There are already results of successful overclocking of a variety of Alder Lake CPUs, and now the source has published the result of overclocking the exclusive six-core Core i5-12490F processor. The exclusivity of the CPU lies in the fact that it is presented only in the Chinese market.

The Core i5-12490F maxes out at 4.6GHz, but the BCLK OC feature allowed us to bump the clock up to 5.7GHz, about a quarter. The voltage also had to be increased. As you can see in the screenshot, it was 1.696 V. There is an assumption that the excellent overclocking potential of the Core i5-12490F is due to the fact that this CPU, unlike the six-core Core i5-12500, is built on a Core i7 chip with partially disabled cores.