ENGWE X26 electric bike launched with a range of 100km on a single charge, getting a big discount 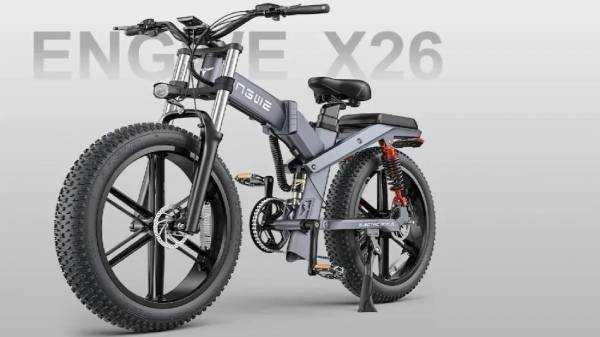 ENGWE Electric Bicycle X26 has been launched under the Indiegogo crowdfunding campaign. It is an all-terrain bike, which means that it has been designed to run in all kinds of areas and conditions. This electric bike has been given a top speed of 50km/h and a range of 100km. The company says that this is the longest range e-bike in the market. By the way, there are many types of Electric Bicycle available in the market. Electric Bicycle companies are making fast. In view of global warming, work is being done on it so that the air can be cleaned.

The retail price of ENGWE X26 is around Rs 2 lakh 15 thousand. But after taking oath in the Indiegogo campaign, it can be bought for about 1 lakh 27 thousand rupees. The deliveries for this will start in October 2022.

The ENGWE X26 is an all-terrain bike that weighs only 41 kg. It comes with a foldable design and can be folded easily. The electric bike has a dual battery of 1,373Wh. These can also be swapped.

The X26 is powered by a 1000W electric motor. This electric bike has been given a top speed of 50km/h in which three speed options have been given, Normal, Assist and Sport.

The ENGWE X26 gets a triple shock suspension system. Due to the thick tires, it gives a comfortable ride. The full color LCD screen has also been installed in the bike so that the rider gets information about the performance simultaneously. It also has a 12W head light and brake light.

Delivery in Europe and America

The company says that the production of the bike is on and the deliveries for it will start in October 2022. The Indiegogo campaign is going to run till August 14. Various discounts are being offered on the e-bike as part of the campaign. At present, the bike can be bought in Europe and America. Its shell has not started in India yet.