Electric bus will run between Indore and Bhopal, this company started premium service 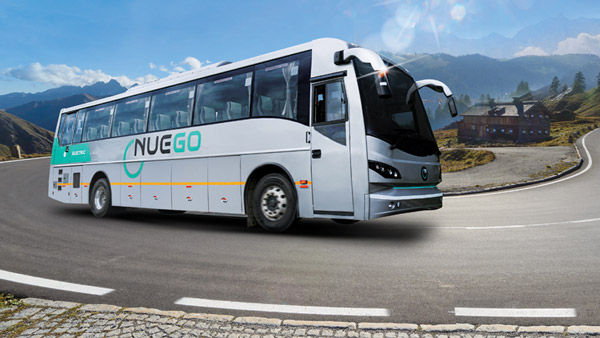 Nugo is planning to introduce electric buses between Delhi to Dehradun and Delhi to Chandigarh very soon. Newgo says it is the first company to offer a premium electric intercity bus service that gives passengers premium lounge access, baggage management services and food and beverage services both on-board and in its lounge in select cities.

The company says that the coaches are sanitized before every trip and the driver is also tested for breath analyzer. Additionally, the coaches come with live tracking feature, geo-location and CCTV surveillance.

Speaking on the occasion, Satish Mandhana, Director, Greencell Mobility, said, “NewGo aims to promote the use of sustainable public transport with zero carbon emissions on inter-city routes. NuGo with its world class electric coach services is a Will provide a holistic travel experience.”

Bhopal to Indore service will be available initially at a cost of Rs 349 per seat, with coaches running from each city at an interval of one hour. The company says that its buses have completed 2 lakh km of testing on Indian roads before providing intercity service. Coaches also undergo 25 stringent safety checks, which include both mechanical and electrical inspections.

NUGO buses on the Bhopal route will stop at ISBT, Bhopal Railway Station, Lalghati and Sehore, while passing through Star Square, Radisson Square and Vijay Nagar and Sarwate Bus Stand in Indore. NueGo says it plans to operate a fleet of 350 electric buses in the country, which will offer intercity travel between 30 cities on a daily basis with the company’s partners.

Let us inform that Green Cell Mobility launched the Nugo Intercity Electric Bus Service in April this year. This is India’s first intercity electric bus service. The company plans to introduce 750 electric buses that will provide intercity bus service in southern, western and northern India, covering major routes with coverage in over 75 cities. The company plans to run 200 electric buses in Delhi-NCR and 100 in Madhya Pradesh.

Not only this, with the introduction of multiple electric buses, the company will create 4,125 jobs and save around 56,154 tonnes of carbon dioxide emissions over the lifetime of these buses. In its first year of operation, the company will electrify about 28,000 km across the country.